Writer Clare Boothe Luce once said, “Money can’t buy happiness, but it can make you awfully comfortable while you’re being miserable.” That theory plays front and center on “Loot,” the new Apple TV+ series centering around Molly Novak (Maya Rudolph), a Melinda Gates/MacKenzie Scott-inspired character who discovers that her uber-wealthy tech entrepreneur husband, John (Adam Scott), has been having an affair with his much-younger assistant. The ensuing, heavily-publicized divorce leaves a devastated Molly with an $87 billion settlement and ownership of her marital home but facing an uncertain future. Lost and alone, she starts working with her charitable foundation full-time and, in the process, makes some unlikely friends and begins to find herself, forging a new life path.

Just renewed for a second season, the series is a bright addition to the Apple TV+ lineup, thanks mainly to the fabulous ensemble cast, heartwarming storylines and Rudolph’s hilarious and poignant portrayal of Molly. Despite her unimaginable wealth, in Maya’s expert hands, the character becomes highly relatable, with her ostentatious lifestyle serving up plenty of comedic fodder as well as an endless array of gorgeous settings, not the least of which is the billionaire divorcée’s mega-mansion.

As series co-creators Matt Hubbard and Alan Yang discovered during pre-production, there was only one spot in all of Los Angeles large and lavish enough to pull off the role. Yang explained to Australia’s News.com, “When we were researching and location scouting, we were finding these places and saying, ‘Yeah, that’s a $40 million or $50 million mansion, what’s the next level?'” They pinned down that “next level” aesthetic with The One, a gargantuan estate situated atop a nearly 4-acre promontory overlooking the entire city at 944 Airole Way in Bel Air. (Please remember this is a private home. Do not trespass or bother the residents or the property in any way.) 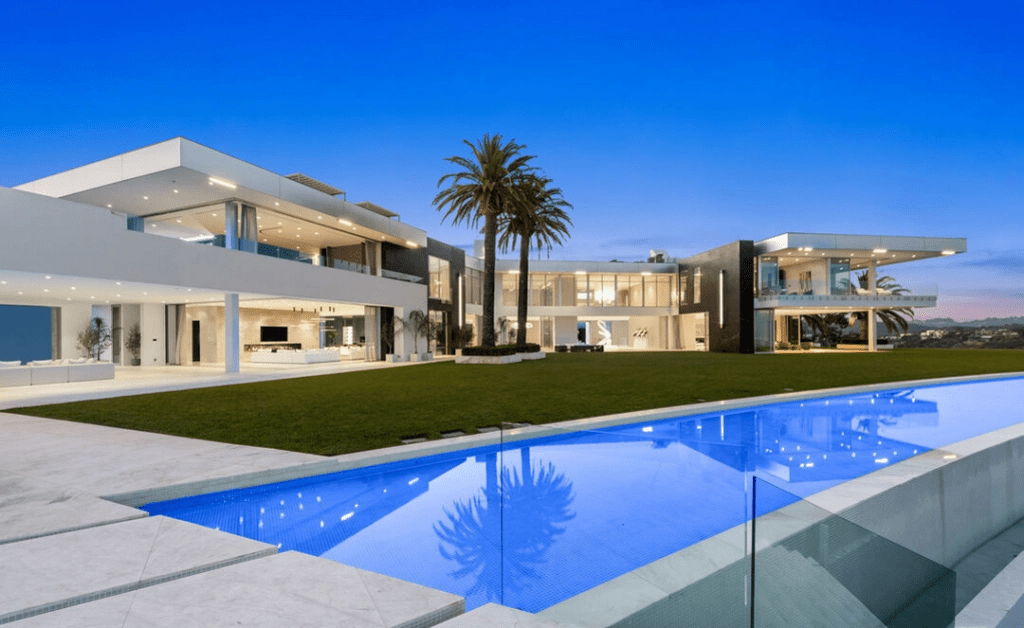 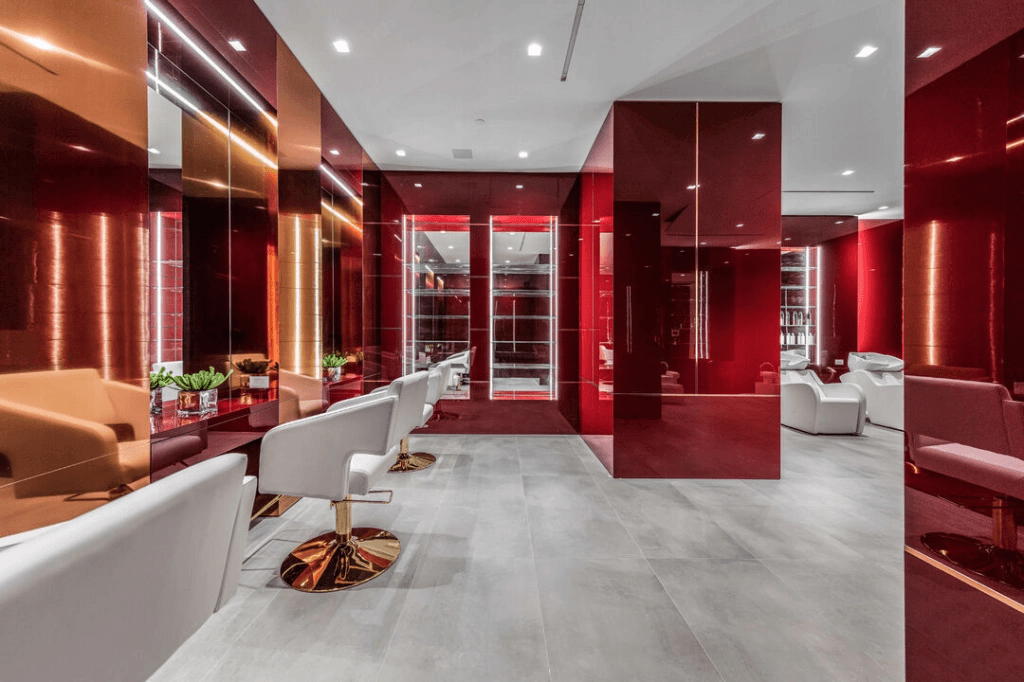 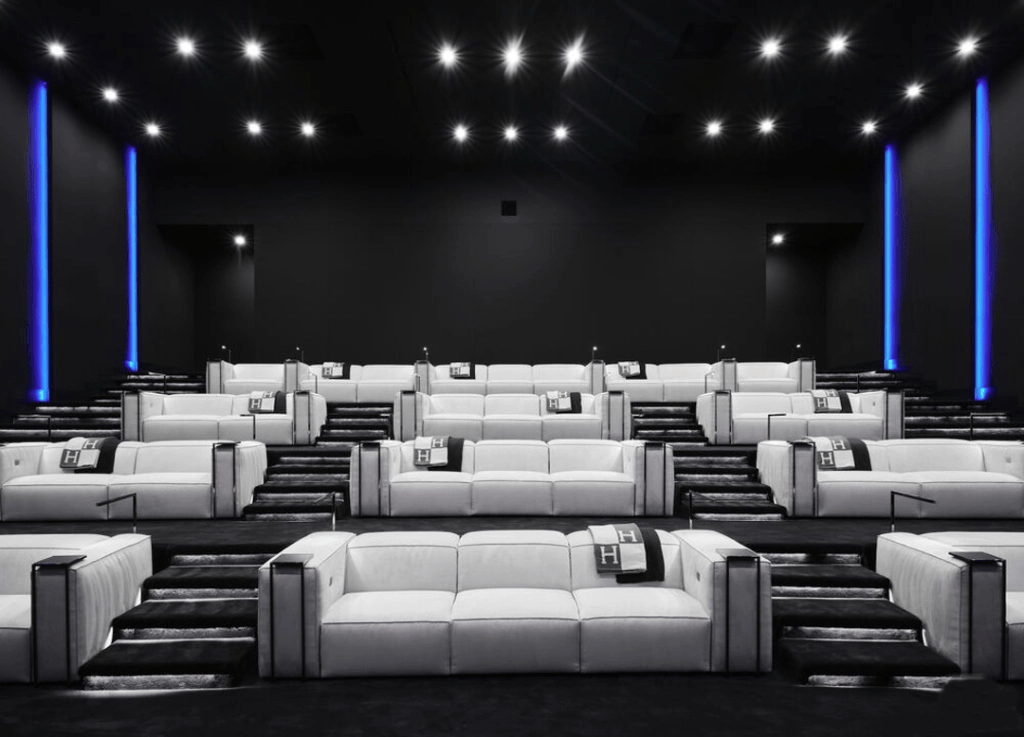 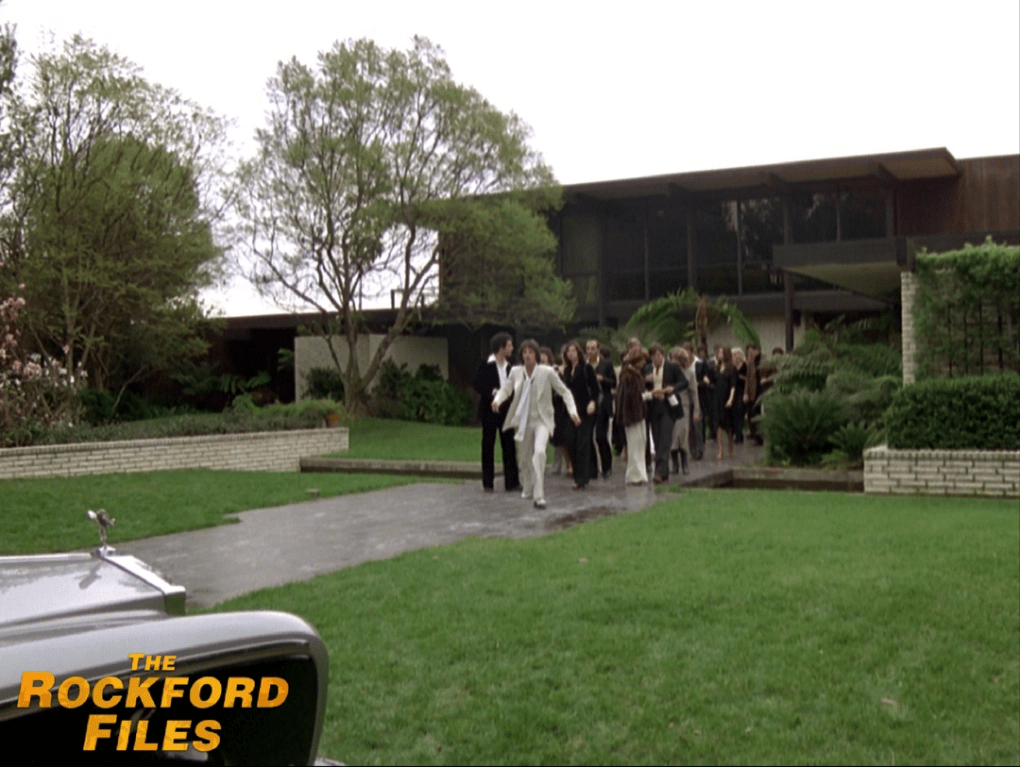 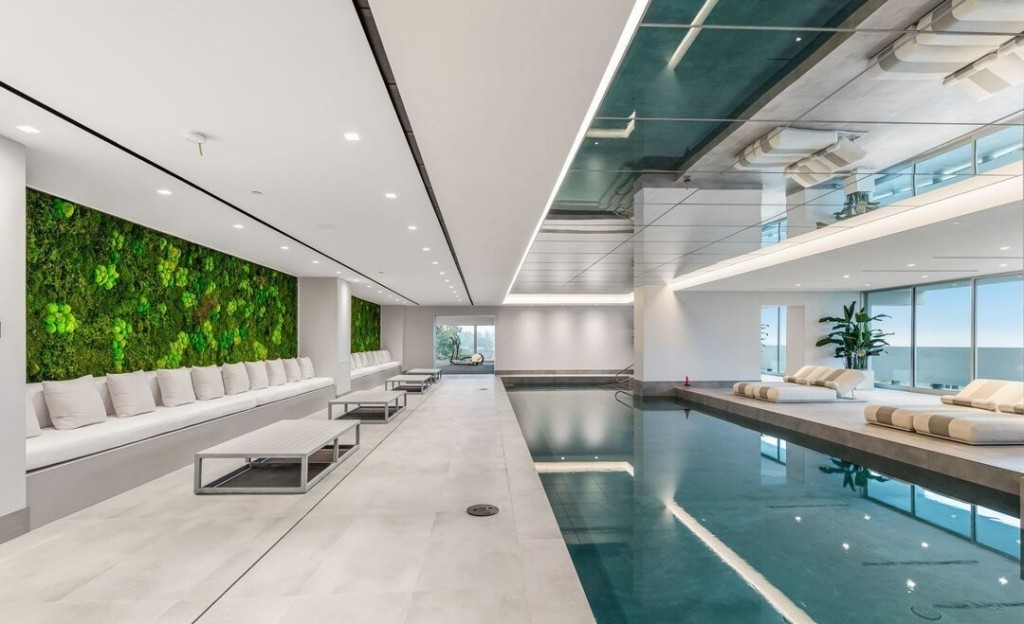 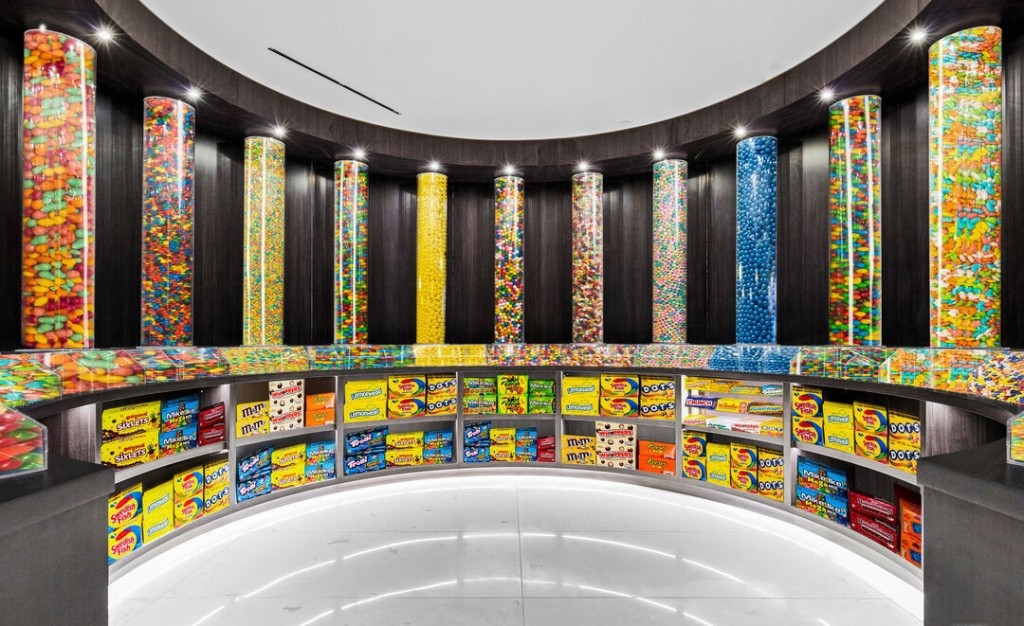 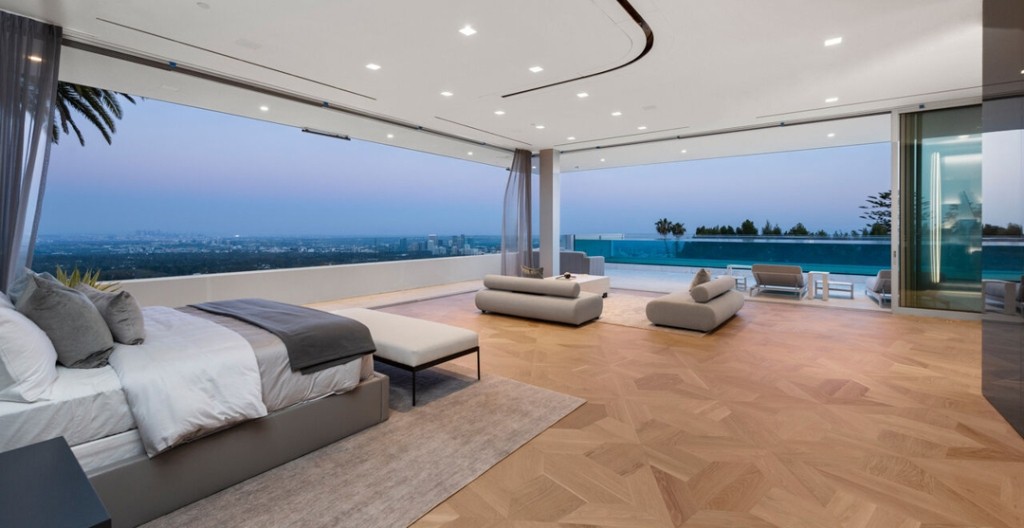 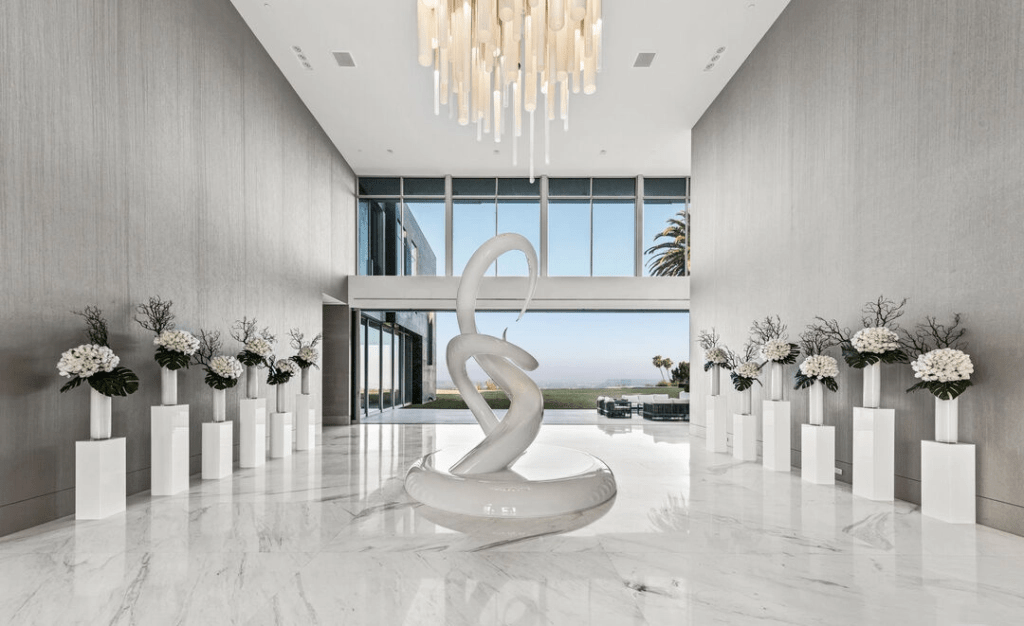 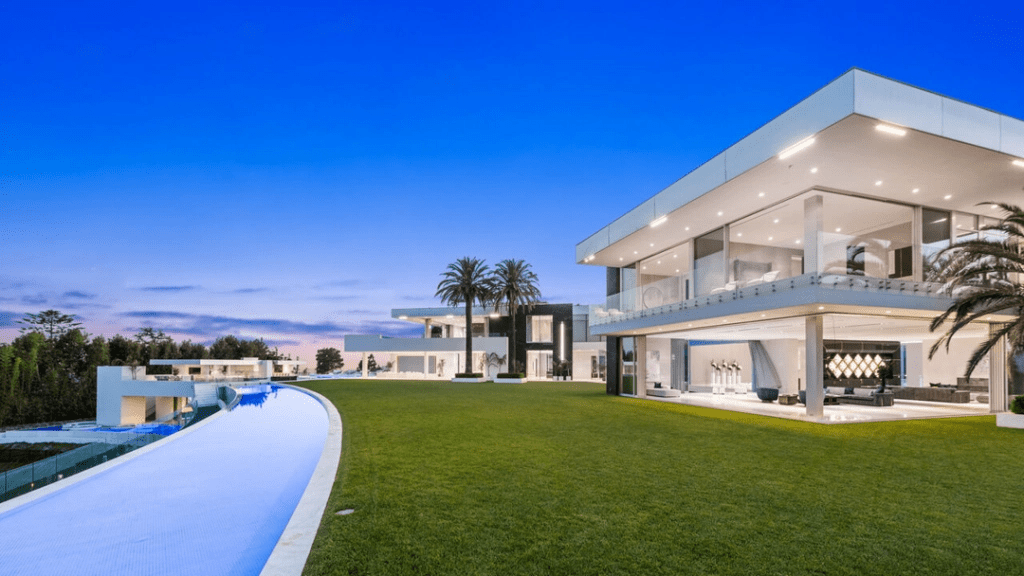 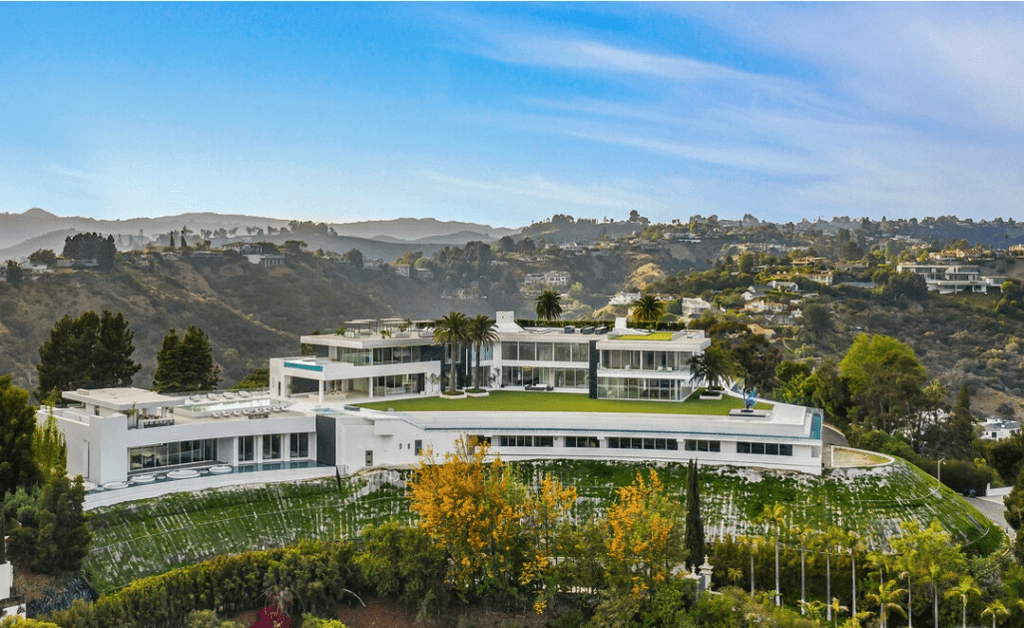 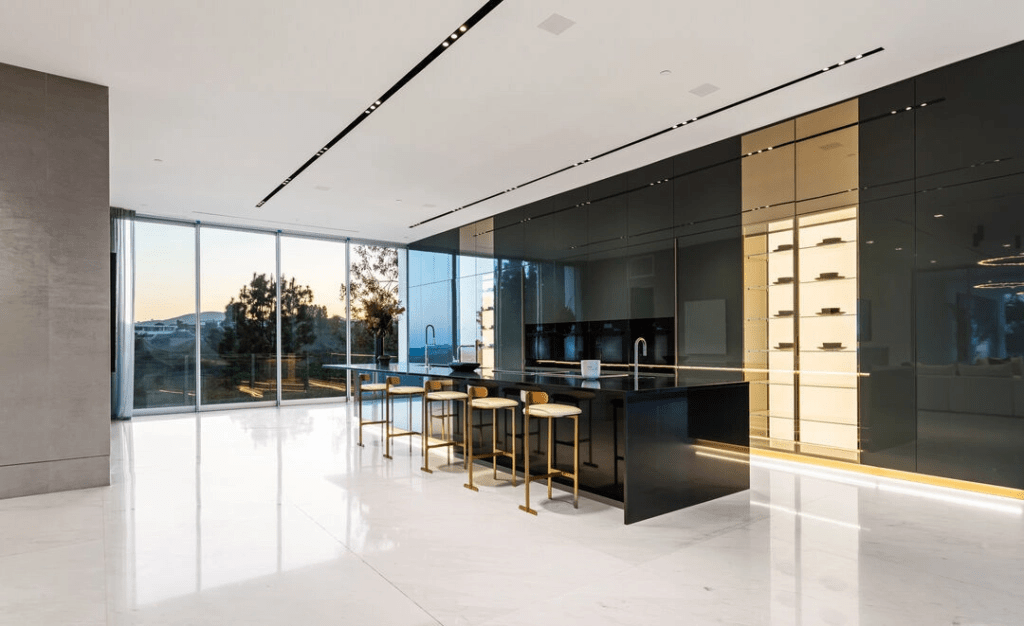 Boasting almost inconceivable specs, the massive residence counts 21 bedrooms and 49 baths in a staggering 105,000 square feet and, according to Architectural Digest, has the distinction of being the largest private home in the U.S.! The owners’ suite alone is larger than most houses, measuring in at an incredible 5,500 square feet!

The sprawling estate was the brainchild of eccentric real estate developer Nile Niami, who shelled out $28 million for the parcel where it now stands in December 2012. At the time, the lot housed a dilapidated midcentury pad built in 1968. Niami proceeded to raze that structure and commissioned architect Paul McClean to design the mega-mansion to end all mega-mansions in its place.

The result is The One. While Niami originally intended to complete the dwelling in under five years and list it for sale for a whopping $500 million, that plan never came to fruition. Following nearly a decade of construction (which drew the ire of many of his famous neighbors like Jennifer Aniston), the home went into receivership in 2021 and was finally sold via auction this past March for $126 million (or $141 million with all costs and premiums factored in). Concierge Auctions, in conjunction with Aaron Kirman of Compass and Branden Williams and Rayni Williams of Williams & Williams Estates Group, handled the sale, with Stuart Vetterick of Hilton & Hyland representing the buyer. Per the Storeys website, the pricey transaction “set the record for the most expensive sale ever seen at an auction. It went for more than double the highest U.S. sale at auction and nearly 50% higher than the world record.”

While the selling figure might seem astronomical, the mansion was actually listed for $295 million prior to the auction – and, as reported by our own James McClain, wasn’t even complete when it changed hands! In an article detailing the sale, he wrote, “There’s still much construction to be done; experts say it will take many months and as much as $20 million just to finish the place.”

Even in an incomplete state, The One was unparalleled, as befitting its name. Overtly over-the-top (and then some!), the interior looks more like a luxe hotel than a private home. Just a few of the extraordinary amenities dotting the premises include a four-lane bowling alley, a nightclub, a 50-car garage, multiple climate-controlled wine rooms, a fitness center complete with a juice bar, six elevators, an art gallery, a putting green, a cigar room with special ventilation and a wall lined with framed vintage Playboy magazines, a full-service wellness center and a gym – though in a house that large, there’s no need to visit the latter as one can easily get their steps in just walking from the main bedroom to the kitchen and back again!

360-degree views of the surrounding landscape can also be had from nearly every point and countless works of art custom-built for the property, including the rotating Mike Fields-designed sculpture known as “Unity” pictured above, are displayed throughout.

Though all areas of the home are insanely opulent, the owners’ suite is a truly grand affair! Lined with pocketing glass doors, the expansive retreat comes complete with its own living room, kitchen, bar, office, pool, spa, deep plunge, his-and-her baths and closets, and a ceiling-mounted TV that swivels 360 degrees on an overhead track to face every angle of the room, including the patio!

The property also boasts a 4,400-square-foot guest house, a glass-encased running track, a 10,000-square-foot sky deck, a north-south-facing tennis court, five pools (because four is just never enough!) and a staff wing with seven bedrooms, laundry facilities, a kitchen and living areas. The One is so large with so many extraordinary amenities, in fact, that Michael Blakey’s video tour of the residence lasted more than 60 minutes and had to be broken up into two parts! According to Storeys, there is even a “philanthropy pavilion” on the premises. I won’t pretend to know what that is, but it sure sounds like it would be perfect for Molly’s new endeavor on “Loot!”

The One and its many palatial elements are showcased prominently on the series, effortlessly illustrating Molly’s extravagant riches, the likes of which most viewers can only ever dream about. Fans may be surprised to learn, though, that the estate as seen on TV is actually a mix of both the mansion’s real living spaces and soundstage-built sets created by production designer Jennifer Dehghan at the Paramount Pictures lot in Hollywood.

The sets include the areas most often seen on the show and, therefore, most regularly used by production, such as Molly’s elegant dressing room, spacious closet and designer kitchen. The One’s actual kitchen is much larger and sleeker than its onscreen counterpart.

But remarkably, the most over-the-top areas of Molly’s homestead are actual fixtures of The One, including the salon where she gets her hair and make-up done in episode two (shown from a different vantage point above). Equipped with three hair washing stations, three styling chairs and two pedicure set-ups, the mansion’s real owners should never have a need to visit a place like Halsa, the snooty day spa Molly gets thrown out of in episode five.

Molly’s candy room can also be found at the mansion. In truth, the round enclave sits, appropriately, just outside the theater. As detailed by Matt Hubbard on Instagram, “We wanted the Candy Room to be a place where you saw the apex of her wealth and the absurdity of it all, and it looks great onscreen.” Dehghan and her team seriously enhanced the unique room for the shoot, color-coding both the back of the lower shelves and the candy filling the dispensers, resulting in a much more sophisticated look.

Considering its massive size and overabundance of rooms, it should come as no surprise that the “Loot” production team utilizes The One for more than just Molly’s house on the series. The estate also masquerades as the interior of the yacht that John gifts Molly for her birthday in the pilot, with one of the many bar set-ups appearing as the ship’s main living area and the wellness center pool popping up as the boat’s “smallest” pool, which Molly muses is so tiny it would be an appropriate spot for her two dogs, Mary-Kate and Ashley, to swim. According to Niami, the moss walls that line the indoor pool were built to “take the natural humidity from the room.” Because, of course.

The midcentury home that originally stood on the premises, which was very reminiscent of the Scheimer House from “The Offer,” was no stranger to the screen, either. In fact, it was something of a 1970s television favorite, popping up multiple times on “Columbo” and “The Rockford Files,” as well as in episodes of “Banacek,” “Barnaby Jones,” “Cannon,” “Quincy M.E.,” and “S.W.A.T.”

A residence as striking and versatile as The One is sure to become a location manager favorite, as well.