Home of the Week: Inside The One, the Sprawling, Embattled Bel-Air Mansion That’s Finally Up for Auction

Poised to become the most expensive sale in the US, the 21-bedroom mansion comes with stellar views, a nightclub and a "philanthropy wing."

It finally has a price tag: $295 million. And while that’s a far cry from the rumored $500 million original asking, the 105,000-square-foot Bel-Air giga-mansion known as “the One” is all set to become the most expensive home sold in the US, ever.

Of course, that all depends on the outcome of next month’s super-high-profile, no reserve, global online auction being masterminded by Concierge Auctions. Did we mention there’s no reserve?

“The auction is really a call to action; a way of letting everyone know that ‘the One’ is finally for sale, and will be sold to the highest bidder,” Aaron Kirman, listing broker and president of the Aaron Kirman Group at Compass, tells Robb Report.

To achieve that coveted “most expensive” accolade, the home has to sell for more than the $238 million that hedge fund manager Ken Griffin dropped on the top four floors of an unfinished condo tower at 220 Central Park South in New York City back in 2019.

Ten years in the making, “the One” was the dream of Hollywood film producer turned mega-mansion developer, Nile Niami. In the early 2000s, Niami commissioned architect-to-the-stars Paul McLean to design the “most expensive home in the urban world”.

To put that 105,000 square feet of space into perspective, it’s twice the size of the White House, and overshadows the 68,500 square feet that’s Hearst Castle in San Simeon, California. Mar-a-Lago in Palm Beach? No comparison at just 62,500 square feet.

And what “the One” offers in true, mind-blowing abundance are some of the most luxurious, over-the-top amenities ever created in a private residence. Like the 42 bathrooms and 21 bedrooms, one of which is the 5,000-square-foot master suite with massive walk-in closets, adjoining two-story office and private pool. Above it is the 10,000-square-foot party-central skydeck with its own putting green. 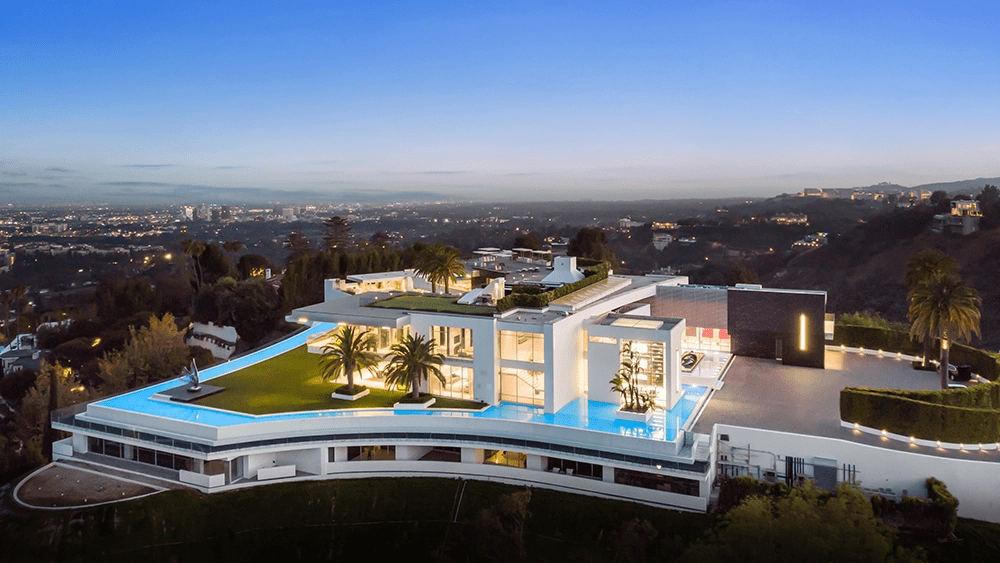 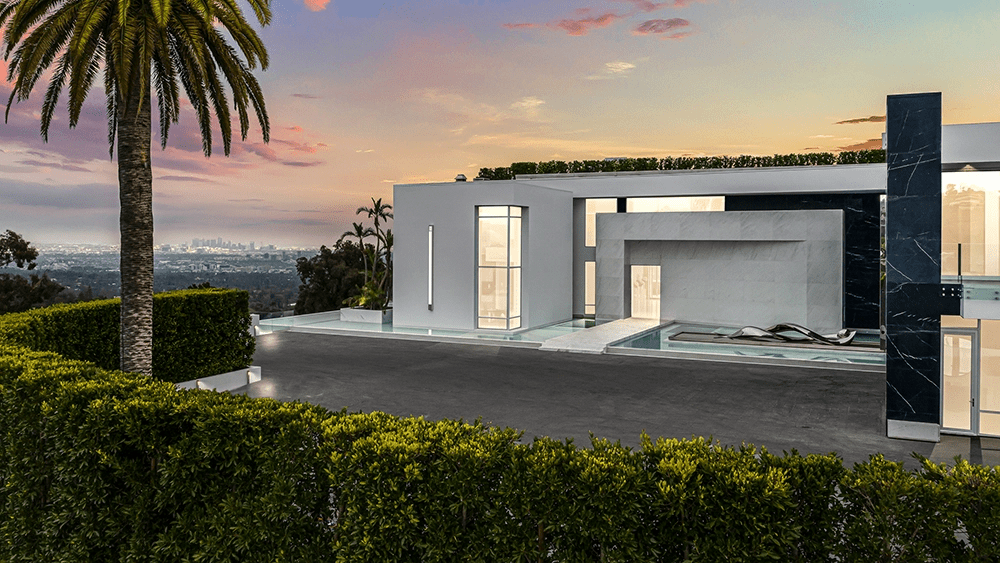 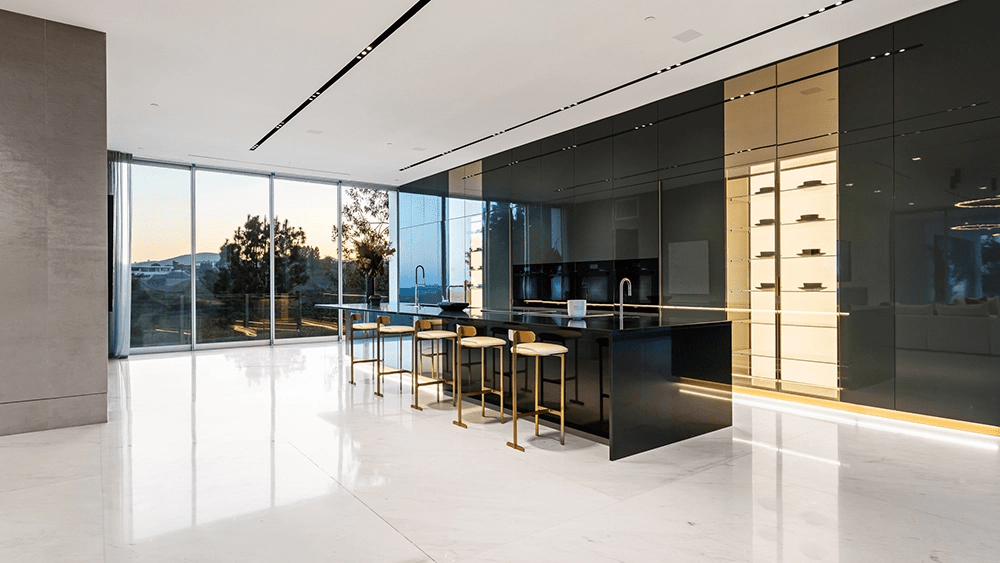 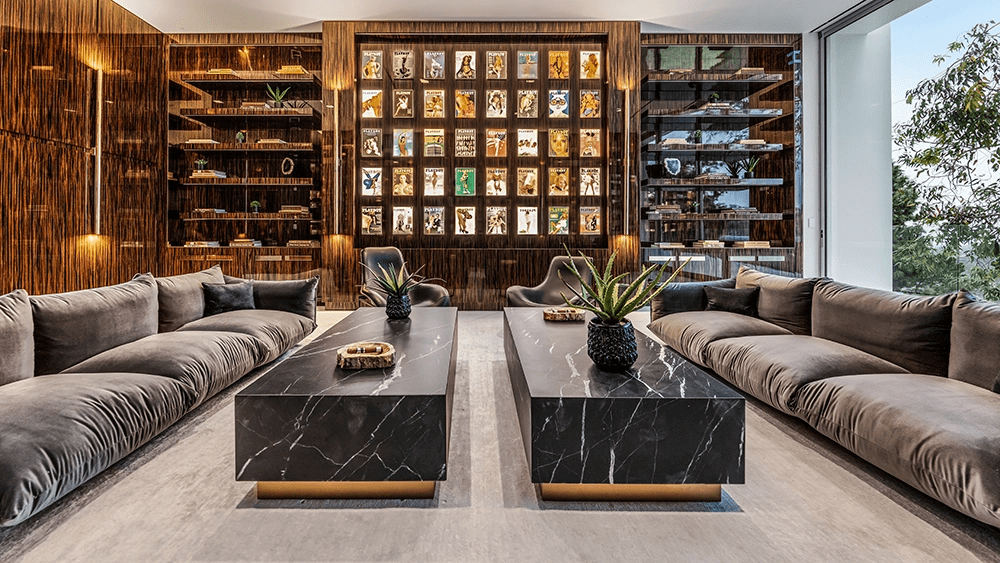 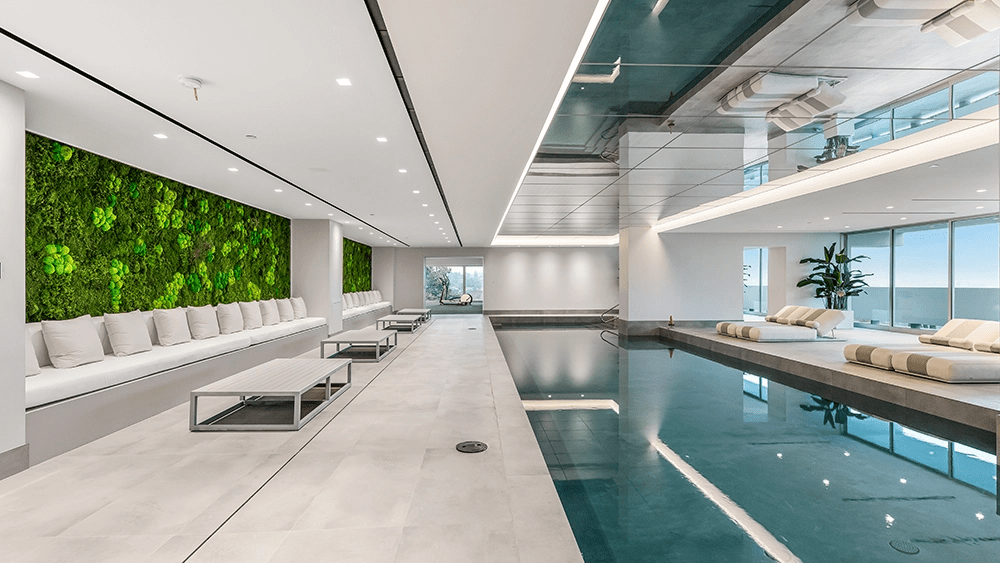 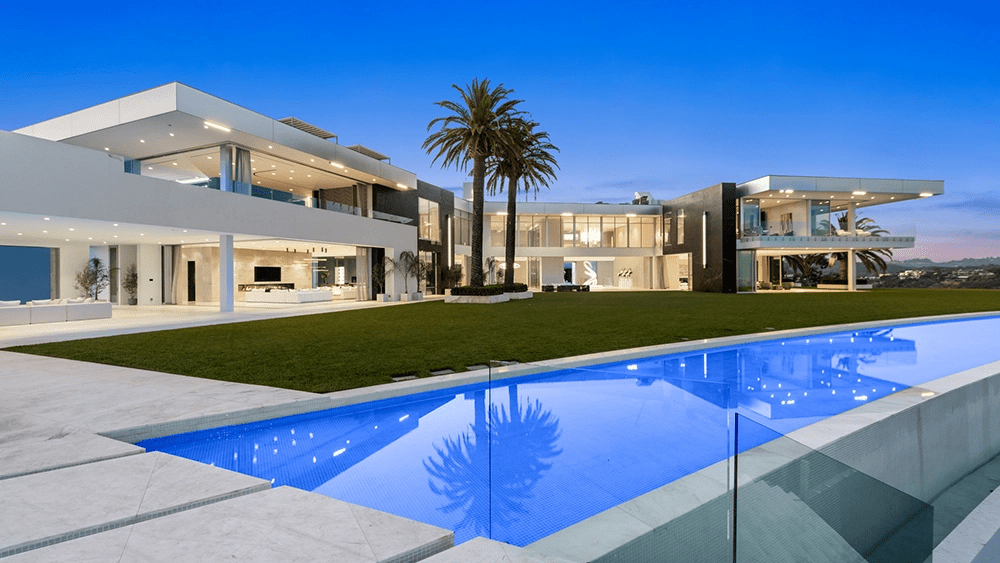 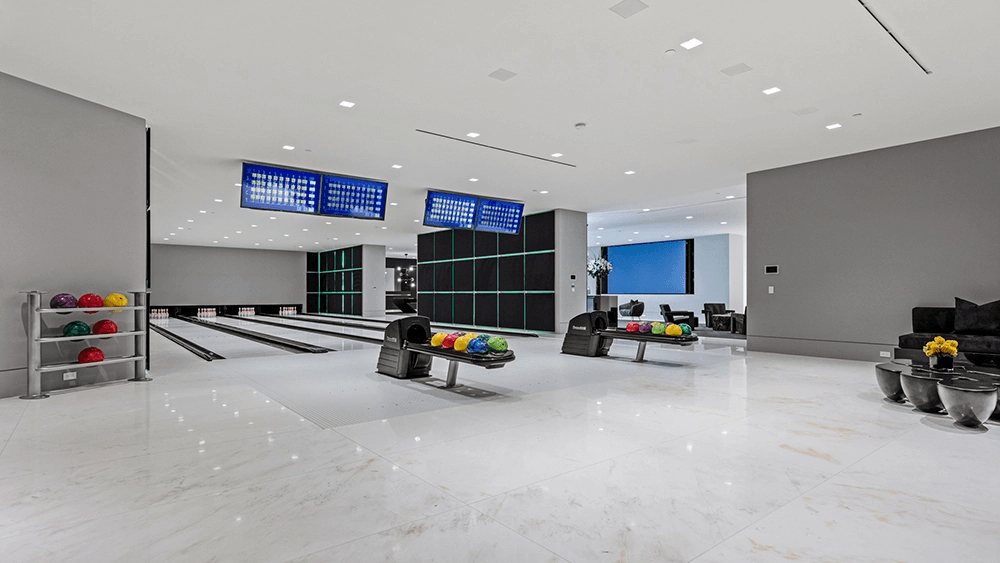 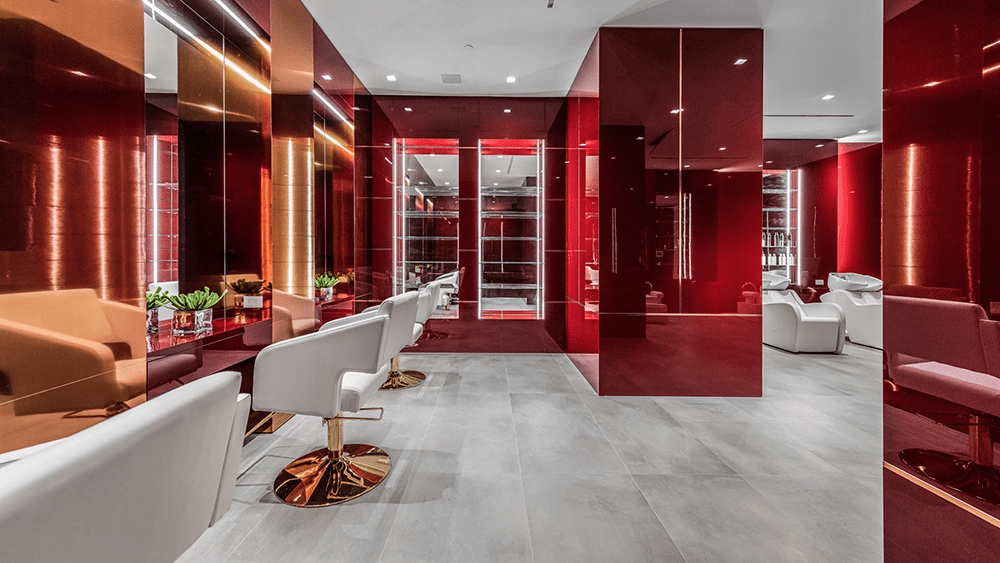 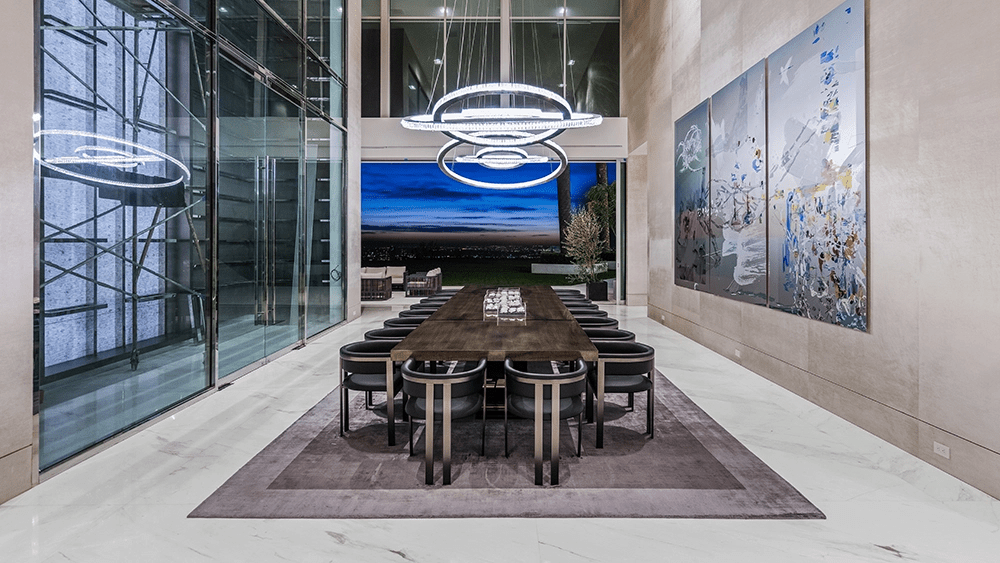 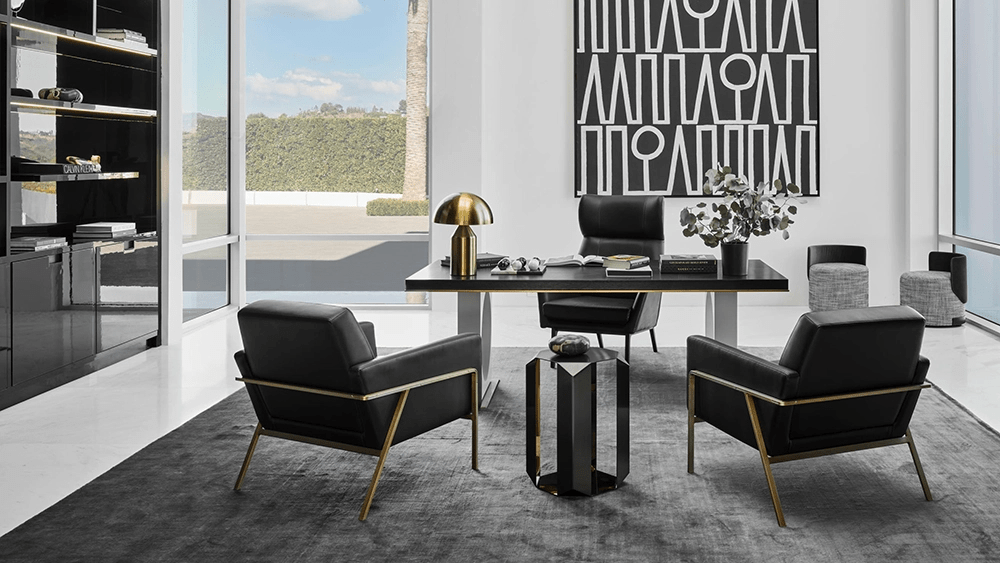 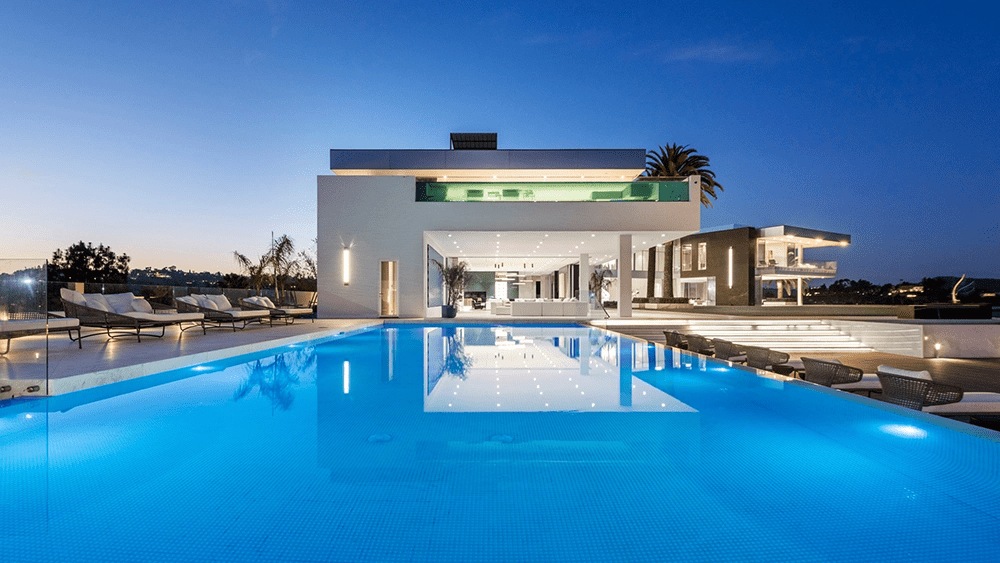 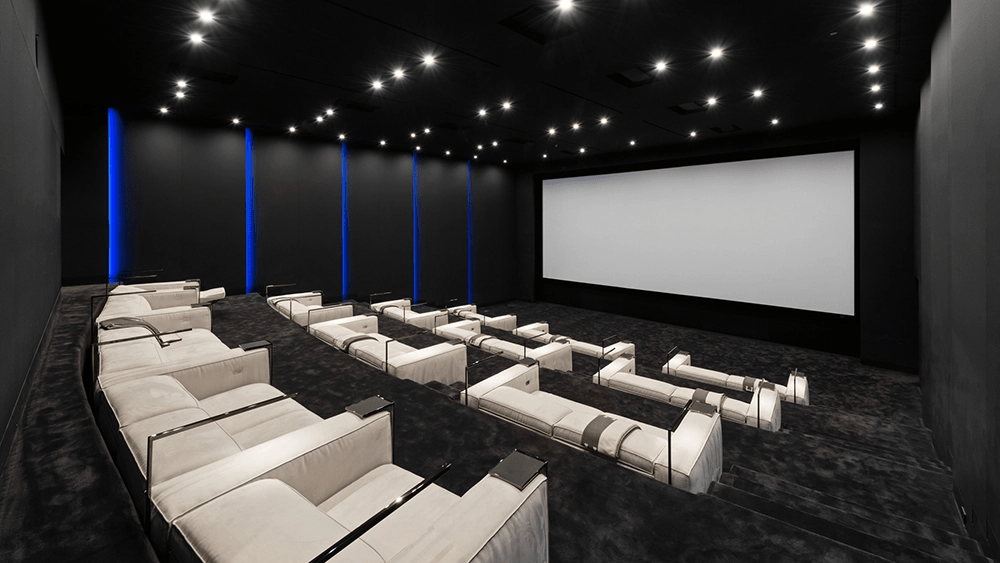 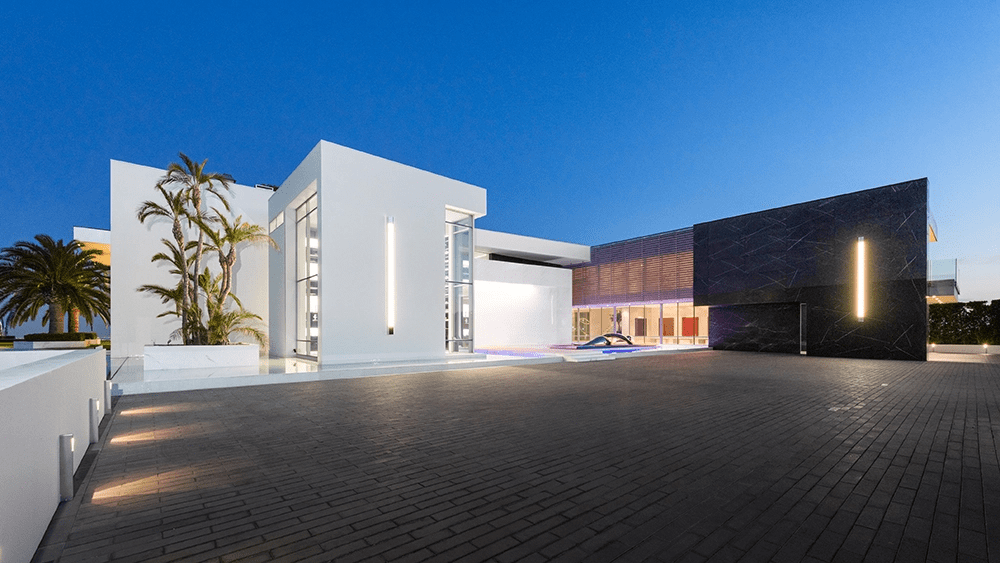 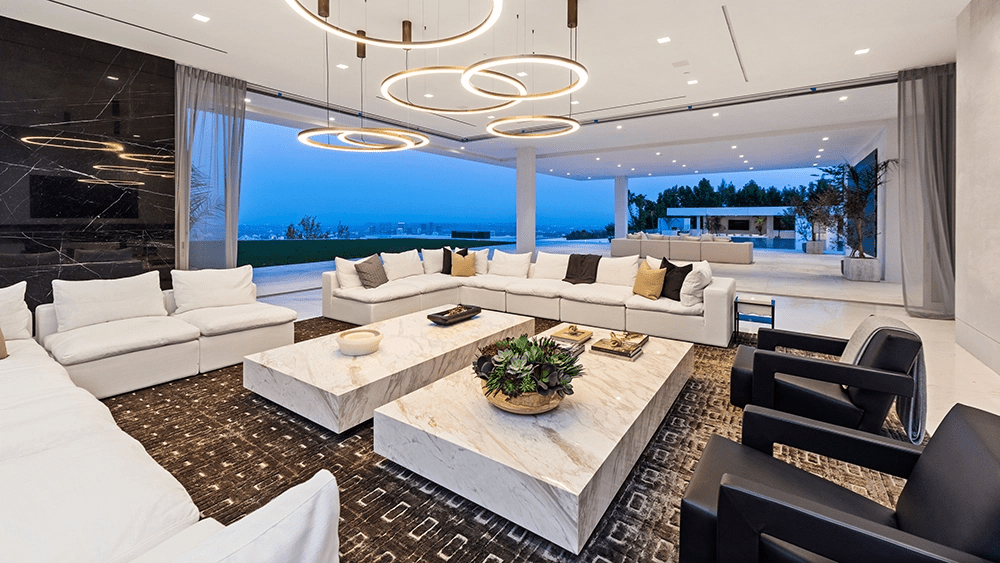 Down on the third floor recreation level, there’s a four-lane bowling alley, a 64-foot-long indoor swimming pool, a wellness center with a vast gym, a full-service hair and beauty salon and a juice bar. Here you’ll also find the cineplex-sized movie theater with seats for 40 and state-of-the-art Dolby Digital sound. And steps away is the wine cellar with racks for 10,000 bottles, plus a cigar lounge.

And when you want to dance the night away with friends, there’s a huge nightclub with a DJ booth and ear-bleeding sound. For more formal gatherings, there’s the “philanthropy wing” for holding fund-raisers and charity galas for up to 200 people.

“This third level is all about having fun, socializing and just enjoying life,” explains Kirman. “It’s essentially a daylight basement with walls of glass and this incredible pool with just amazing views. The juice bar is bigger than most people’s homes.”

To show-off your collection of supercars, below the house there’s a garage big enough for 30 cars, plus a two-car display turntable for that matching pair of Porsches.

The home itself is surrounded on three sides by moat-style infinity-edge pools with massive decks for entertaining. Need to work-up a pre-breakfast sweat? Take a few laps of the 400-foot glass-walled jogging track.

And if 21 bedrooms aren’t quite enough to accommodate all your friends and family, there’s a 4,000-square-foot, three-bedroom guest house close by.

Naturally, with its $295 million price tag, the home is being sold furnished and with all the pricey artwork included. These include pieces by acclaimed artists like Mike Fields, Stephen Wilson and Simone Cenedese.

“With the current zoning restrictions, no one could ever build a home of this size in Los Angeles ever again,” says Kirman. “It is truly unique, not only because of its size, but because it sits on the very best promontory in LA, and in Bel-Air, which is arguably the world’s most exclusive neighborhood.”

So who’s going to buy “the One”? Kirman believes it will go to an overseas buyer, though isn’t ruling out the odd tech mogul or investment banker. “The only thing that’s certain is that you really have to be a billionaire to buy this property.”

While Kirman shares the high-profile listing with fellow brokers Branden and Rayni Williams, of Williams & Williams at the Beverly Hills Estates, the Concierge online auction is set for February 7-10.

Think of it as the one and only chance to buy “the One.”

Check out more photos of the mansion below: