The house, which epitomizes the architect's California Style, was once listed for north of $32 million

The owners of a Santa Barbara mansion by Wallace Neff, the architect who perfected the so-called California-style home, are quietly looking for a buyer amid a surge in demand for houses in the affluent coastal area.

The sprawling, single-story mansion known as the Straus House, with its white-washed brick facade, clay-tile roof and exposed beams, epitomize the kind of rich Spanish Colonial-inspired homes that made Neff popular among a raft of celebrity clientele during the mid-20th century. The home has undergone a more recent expansion that included carving out amenity-packed basement levels and opening up some of its internal floor plan, according to a website promoting the house.

“We’ve noticed that a lot of the big sales in Montecito have sold off market, and this house is just one of those pieces,” said agent Weston Littlefield, who’s working with the sellers alongside Dalton Gomez, both of the Aaron Kirman Group at Compass. “They’re like art pieces.”

The 1.53-acre property sits on a bluff overlooking the Pacific Ocean from Hope Ranch, a tiny, affluent suburb north of Santa Barbara.

The owners, a local developer and his wife, who once listed the home for north of $32 million in 2017, and their agents are not publicizing the asking price this time around. It was last taken off the market in 2018 with a $21.5 million price tag.

At the moment, the only home publicly listed for sale along this stretch of coastline in Hope Ranch is a new build on four acres asking $39 million.

Straus House is so named for its original owner, Robert K. Straus, a native New Yorker and an heir to the Macy’s fortune, who served in President Franklin D. Roosevelt’s administration and later moved to Southern California, where he founded a printing company.

Straus and his wife were fans of Neff’s designs, having owned one in the Bel Air neighborhood of Los Angeles for many years before commissioning the architect to construct the Hope Ranch estate in 1970, according to a 1971 profile of the property in Architectural Digest. 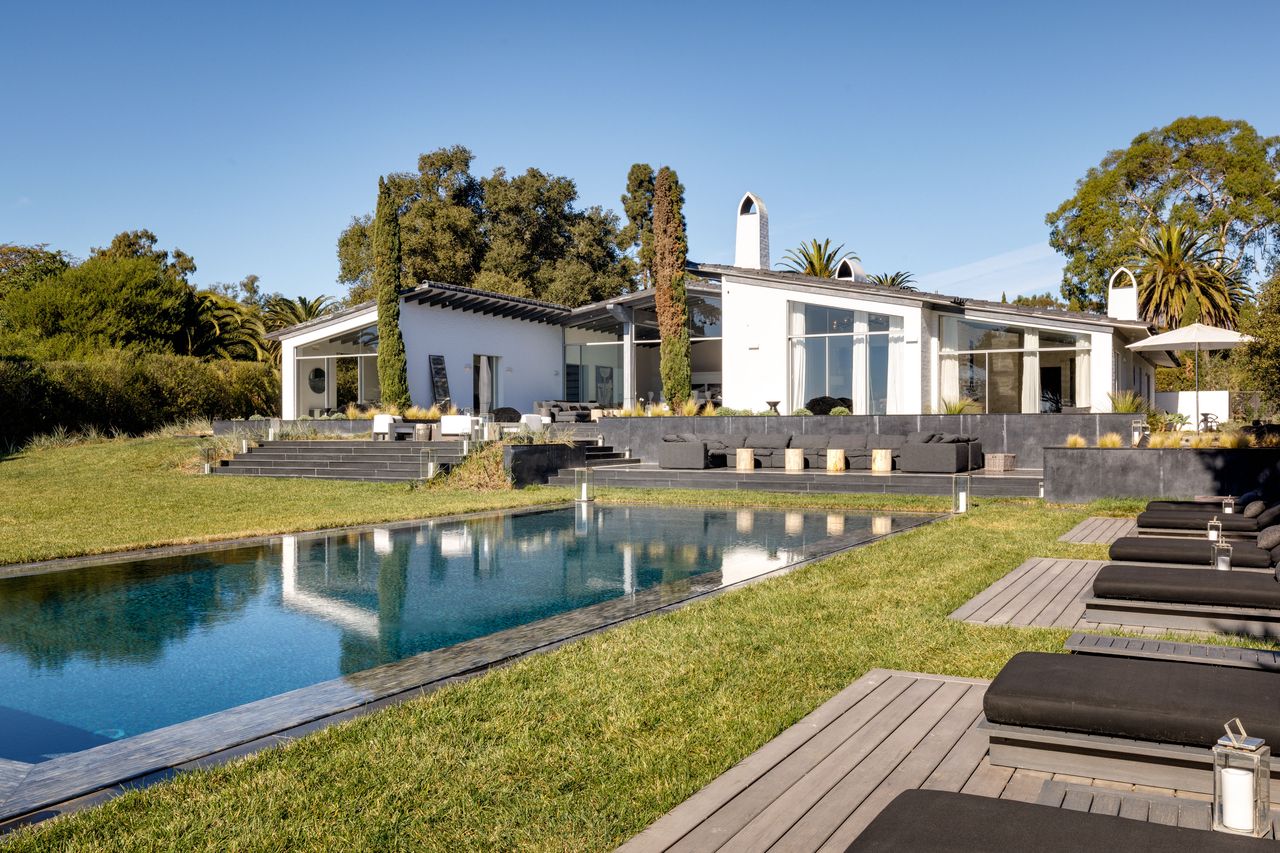 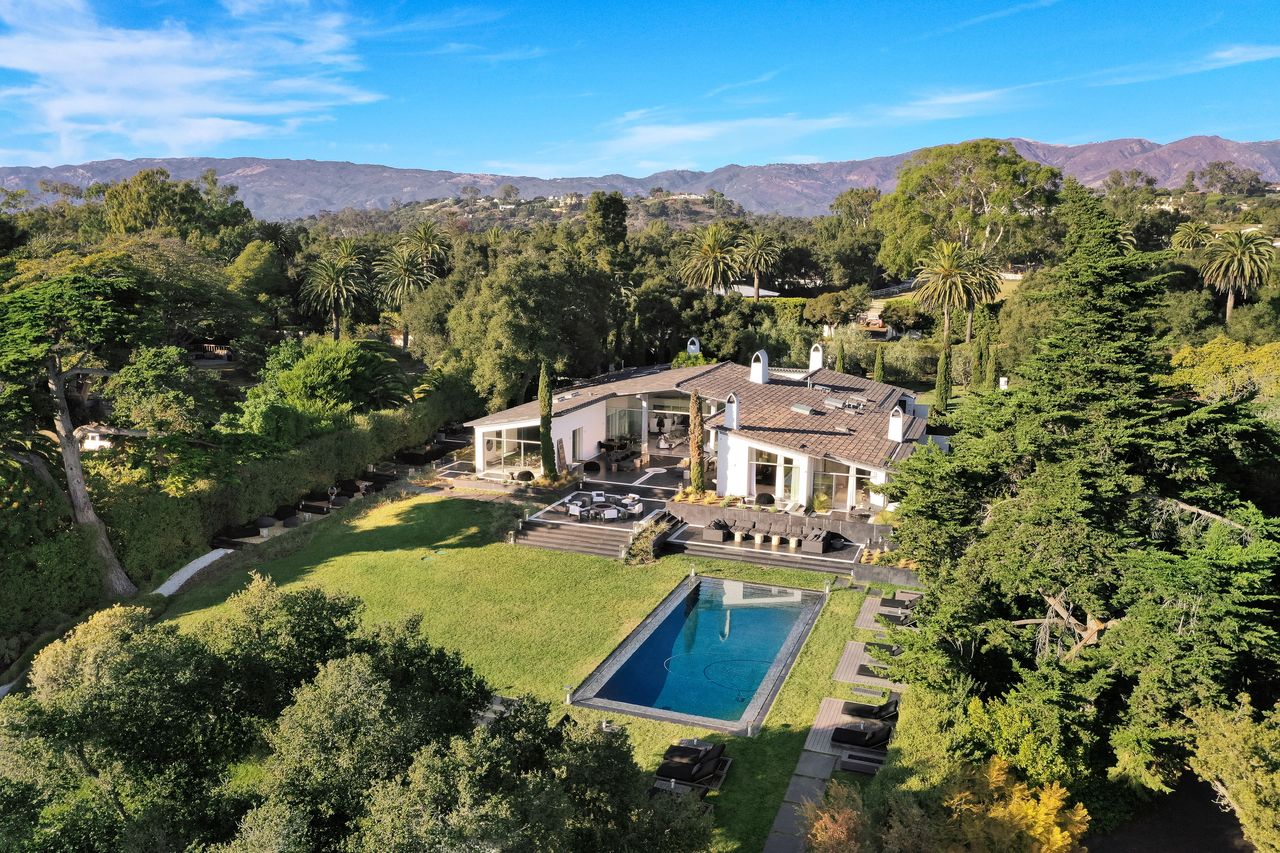 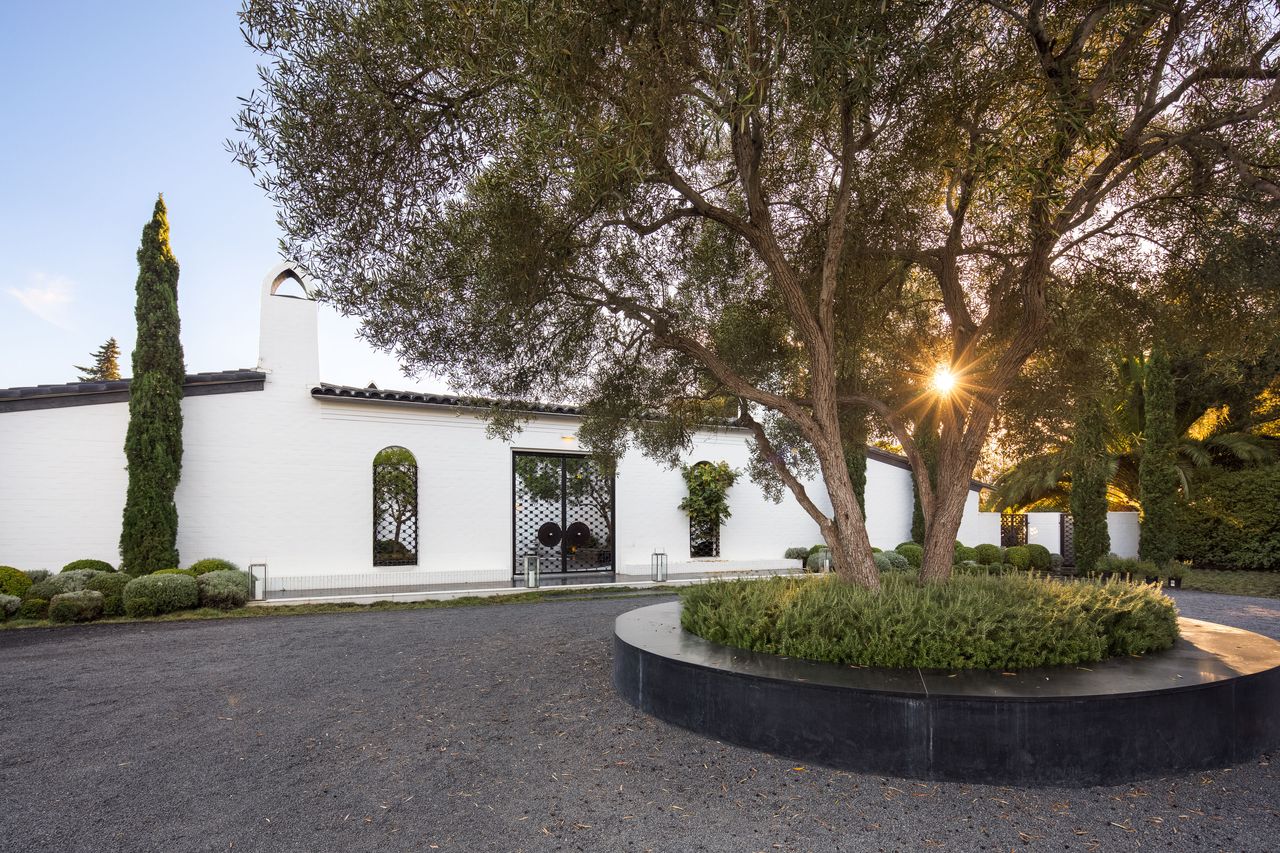 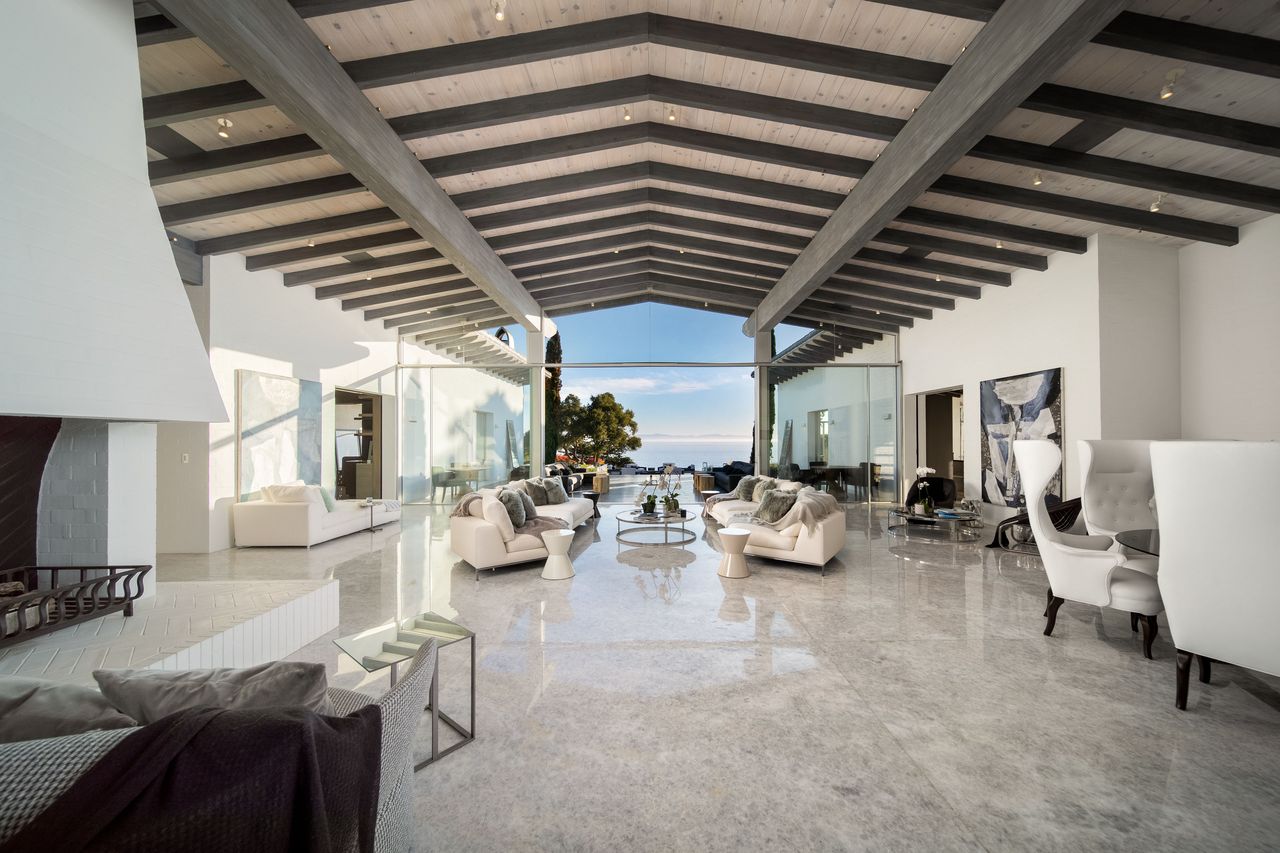 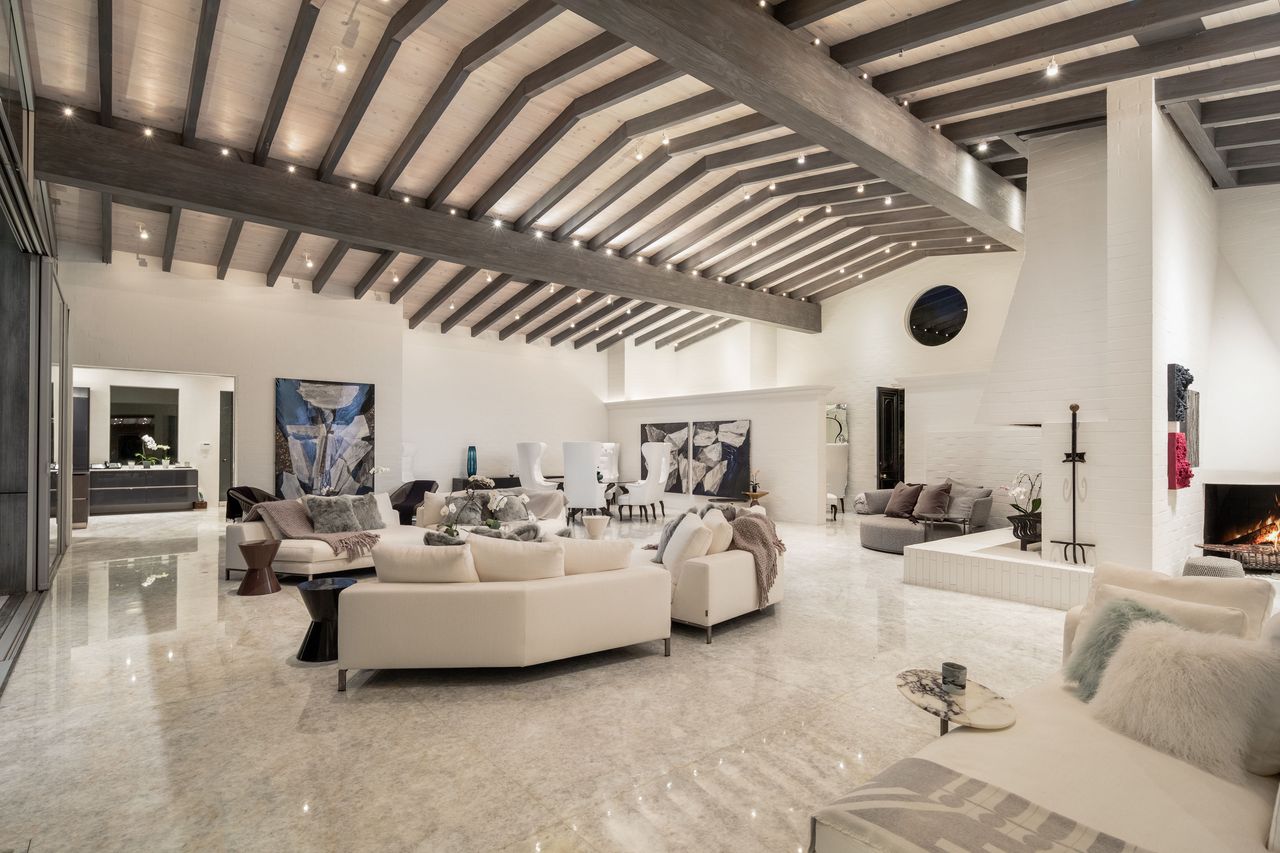 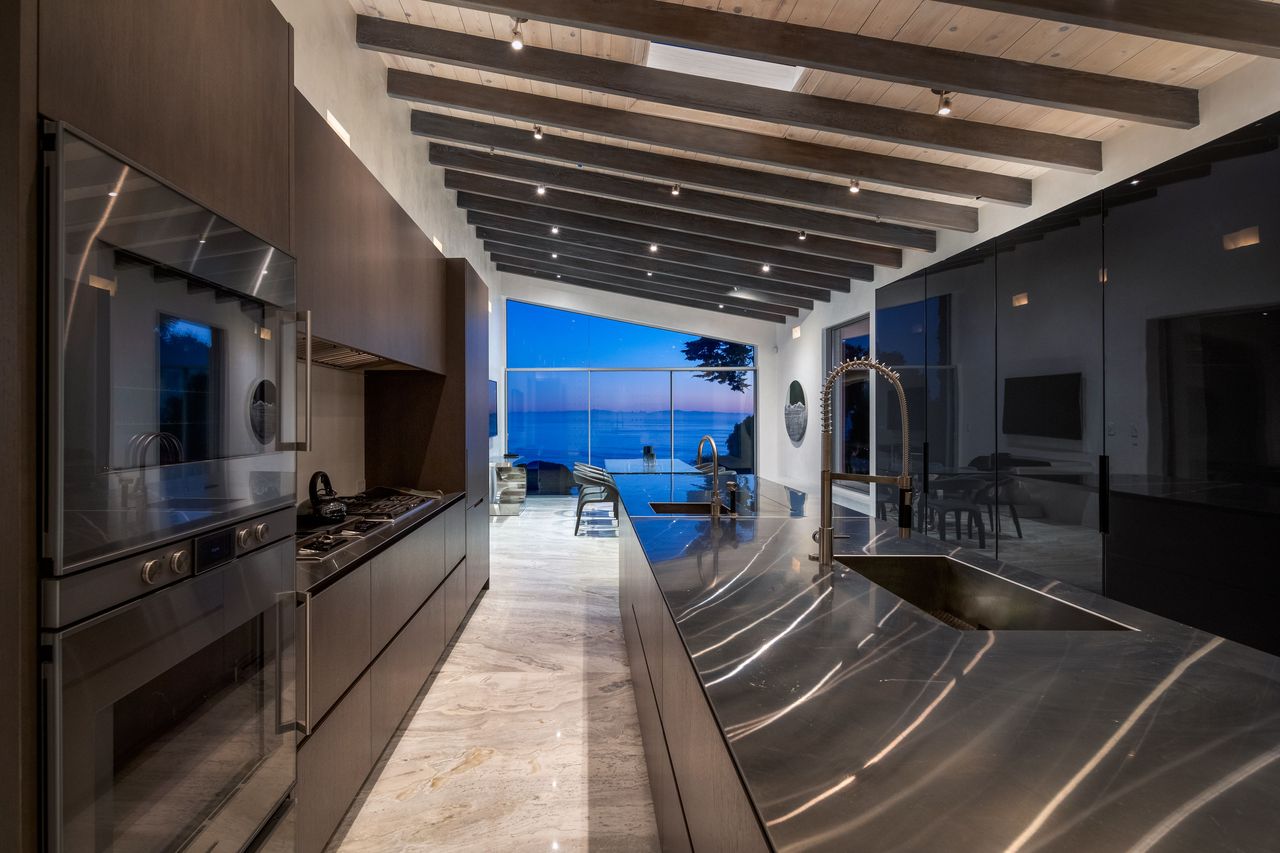 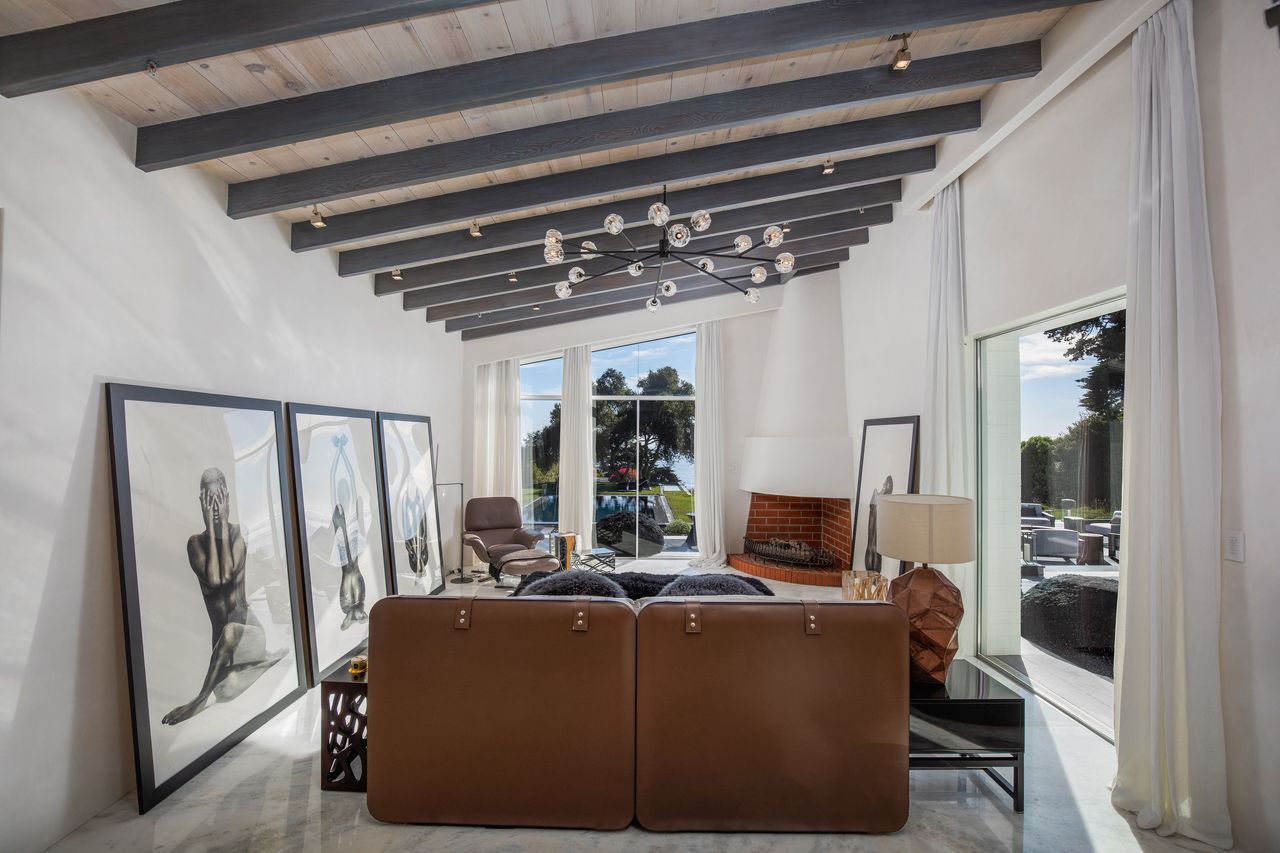 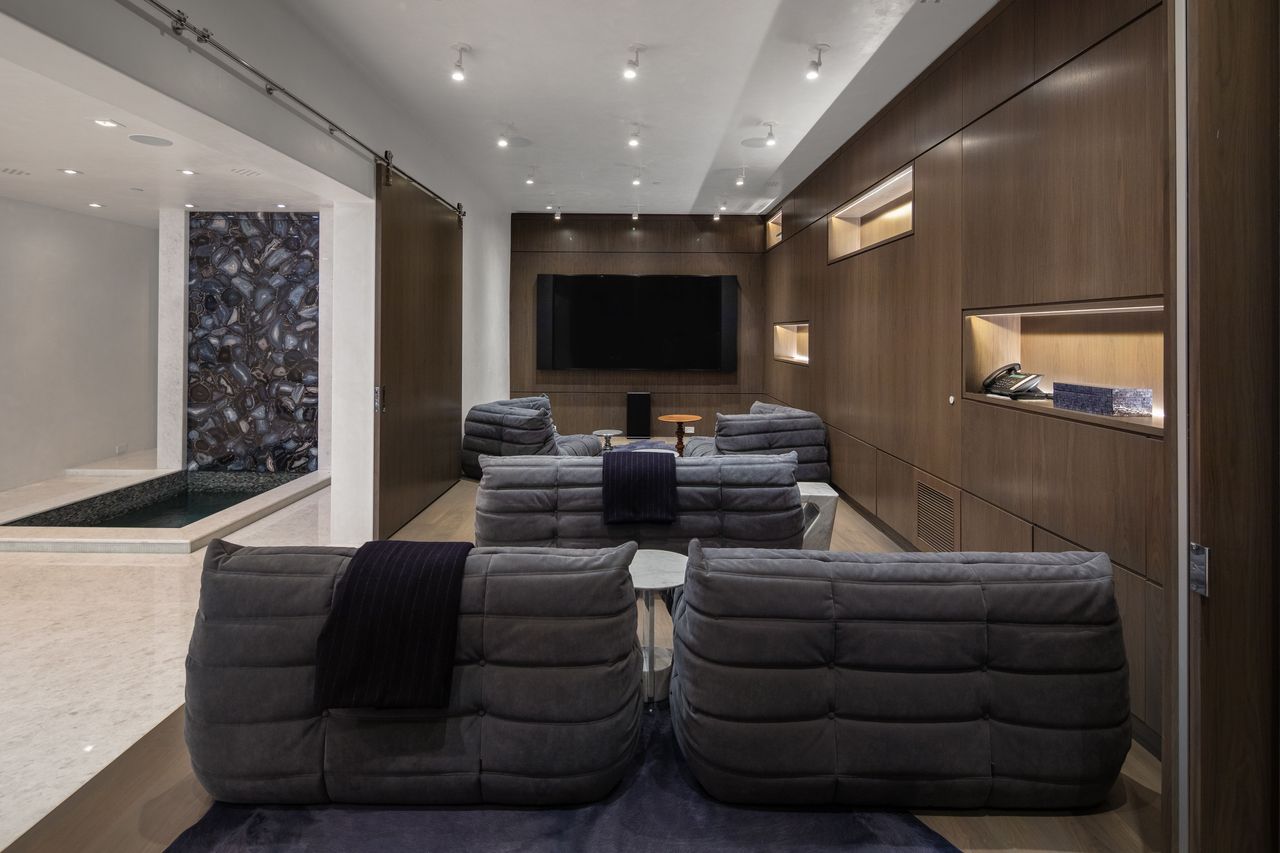 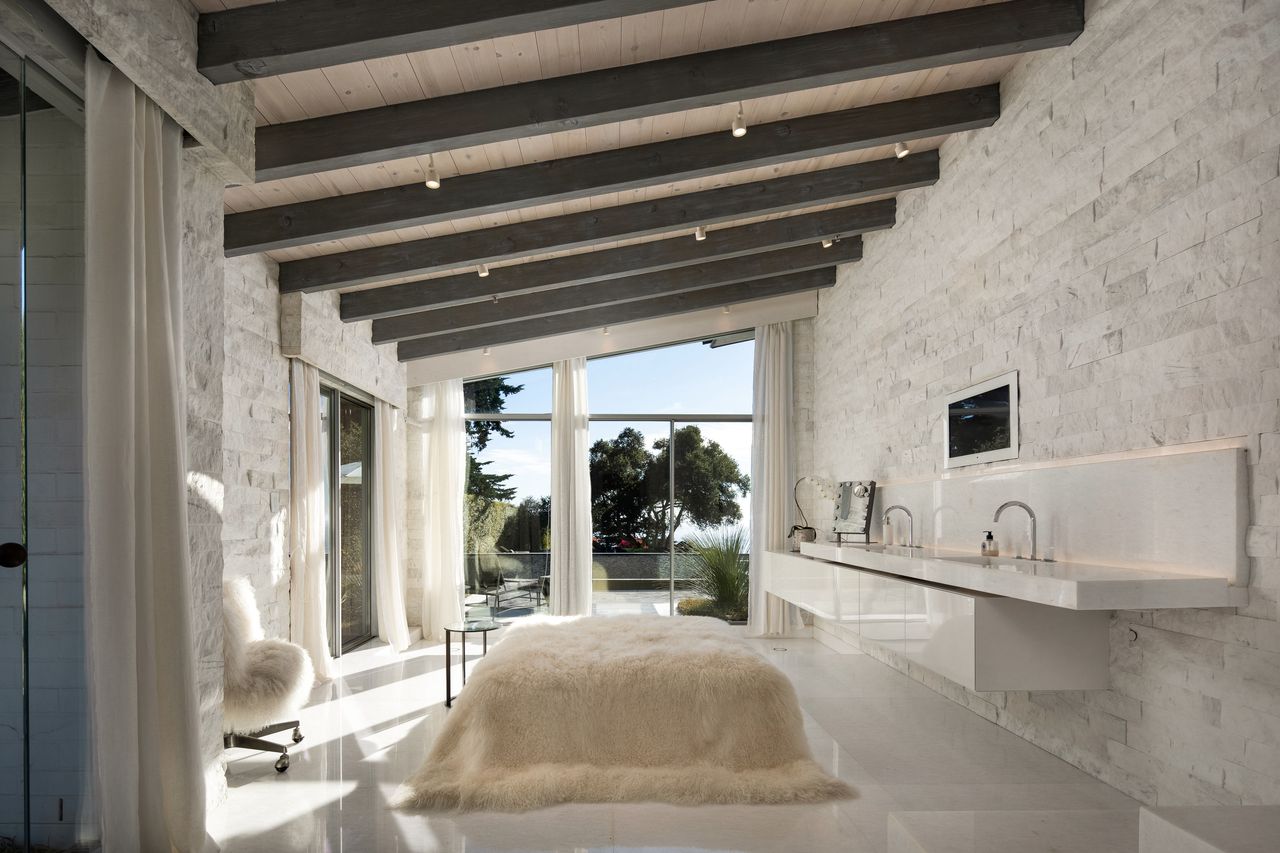 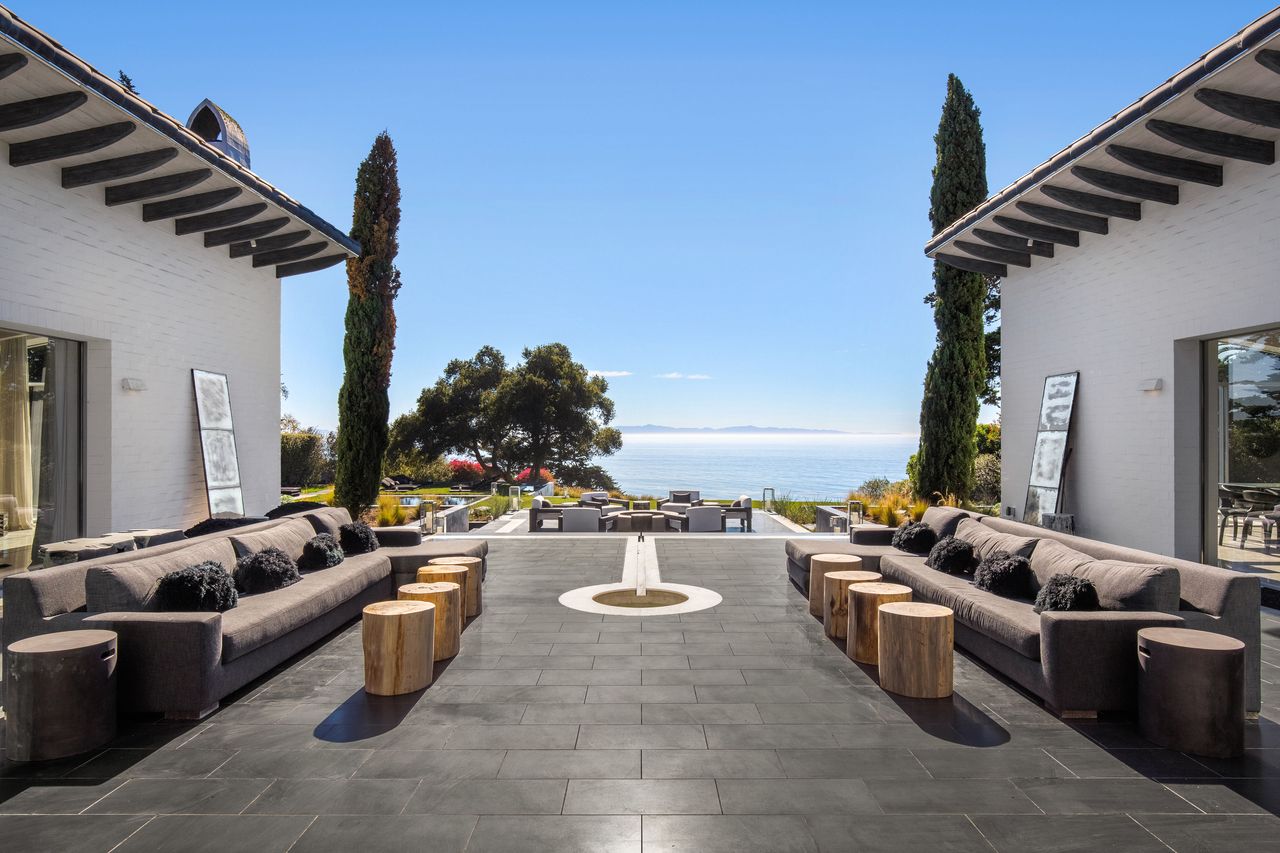 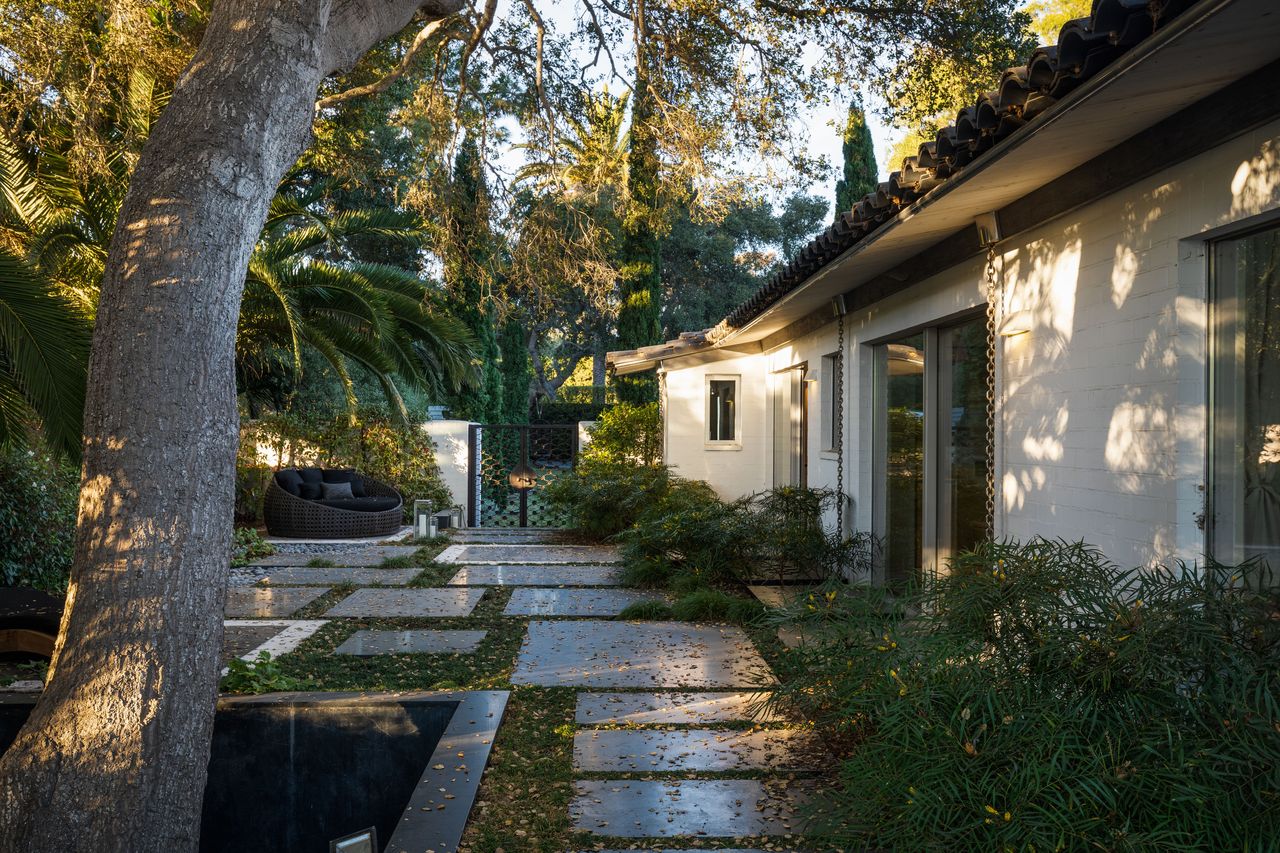 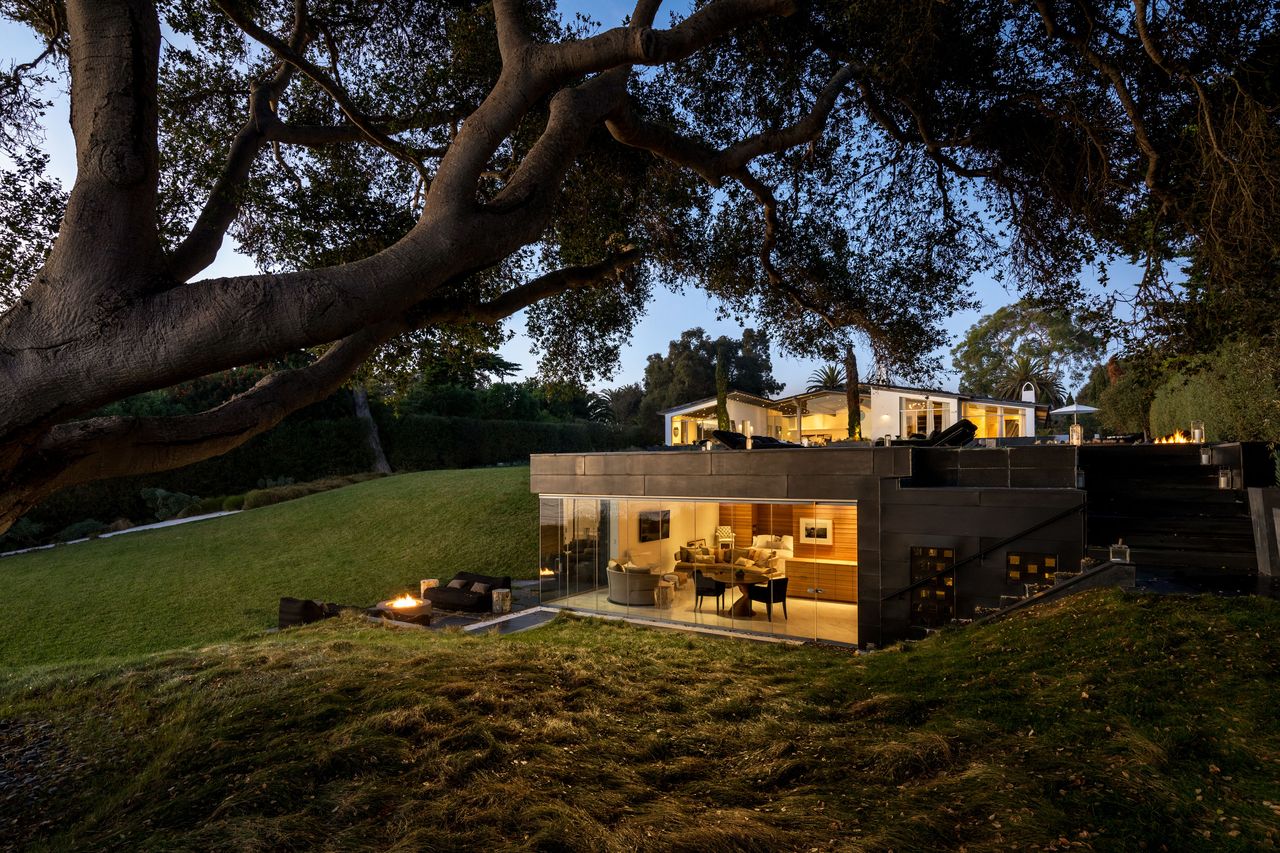 The result has all the hallmarks of the architect. A spacious motor court leads to the home’s imposing entryway, where metal gates open into a Mission-style interior courtyard, beyond which are a set of heavy wooden front doors.

The interiors, by contrast, are airy and light-filled thanks to vaulted, wood-beamed ceilings and a great room with wall-to-wall glass, images of the property show.

The current owners purchased the Neff house in 2007 for $7.5 million and embarked on a decade-long renovation project that married the home’s existing architectural language with more contemporary finishes and a few subterranean expansions, Mr. Littlefield said.

They further opened up the great room, the home’s showpiece, which overlooks the grounds and ocean through one continuous glass wall. They also updated the tile flooring and modernized the kitchen.

The most intense changes required digging out basement levels on either end of the house. The south end now encompasses a media room and mosaic-tile spa, while the other hosts a wine cellar and bedrooms, Mr. Littlefield said.

The ocean-facing backside of the house leads onto a large tiered outdoor terrace with multiple seating areas and down to the sloping lawn, where the owners cleverly tucked a new guest house underneath the pool, images show.

Santa Barbara, like many other second-home markets, has seen a surge in luxury sales in the wake of the pandemic, as families look for more space while working and schooling from home.

As a result, home prices have soared. The median listing price in greater Santa Barbara was nearly $2.8 million in January, an astronomical 61% increase over the same month a year ago, according to the latest market data from realtor.com.

Fewer homes for sale is partly responsible for fast-rising prices in the area. Total on-market listings in Santa Barbara were down more than 40% last month compared to the prior year, according to realtor.com. (Mansion Global is owned by Dow Jones. Both Dow Jones and realtor.com are owned by News Corp.)

Mr. Littlefield said the owners were motivated to sell after seeing significant sales in the area.