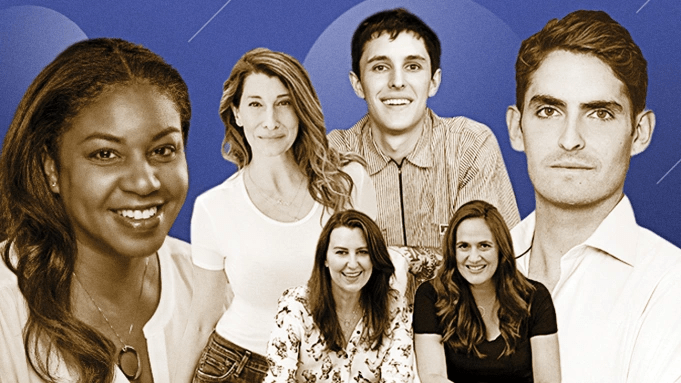 Six emerging heavy hitters on the Hollywood real estate scene — Aaron Kirman Group’s Dalton Gomez, RE/MAX’s Shavonda Hill, Compass’ Lily Harfouche, The Agency’s Cooper Mount and Douglas Elliman duo Learka Bosnak and Heather T. Roy — all emphasize one marker of success in the business: discretion. Hill, who represented Kenya Barris in two transactions this year, has established herself as a go-to for high-profile buyers through word-of-mouth. “A lot of them want privacy and anonymity for where they’re buying,” Hill says of her celebrity clients. “If this is where their kids are going to be laying their heads, they don’t want everybody to know that.” Harfouche — who recently sold to Pink, along with star couple Chris Martin and Dakota Johnson — agrees: “I prefer to be as much of a secret agent as possible. Whether you’re a celebrity or not, buying a home is such an intimate experience.” A Malibu native, Mount is still riding the wave of the quarantine beach-town boom, as he anticipates a record $100 million in sales for 2021. “The lease market exploded when no one was able to get out of town,” Mount says of the pandemic’s effects. “That boosted everything.” For Roy and Bosnak — business partners since 2006 — their clients have come to seek what they refer to as “co-primary homes,” or vacation spots turned permanent residencies. “A beach house all of a sudden was a primary [home], along with a place in the city,” Roy says. The pair has recently found new homes, per public records, for Nahnatchka Khan, Julie Plec, Stephany Folsom and Zuri Hall. Gomez, husband of Ariana Grande, started out working under the tutelage of big-time agent Aaron Kirman and has since struck his own deals with stars like Ella Mai and Justin Bieber. But like his peers, Gomez relies on his reputation. “I’m not really one to market myself,” he says. “I try to go above and beyond for all my clients, and that translates into referral business.” 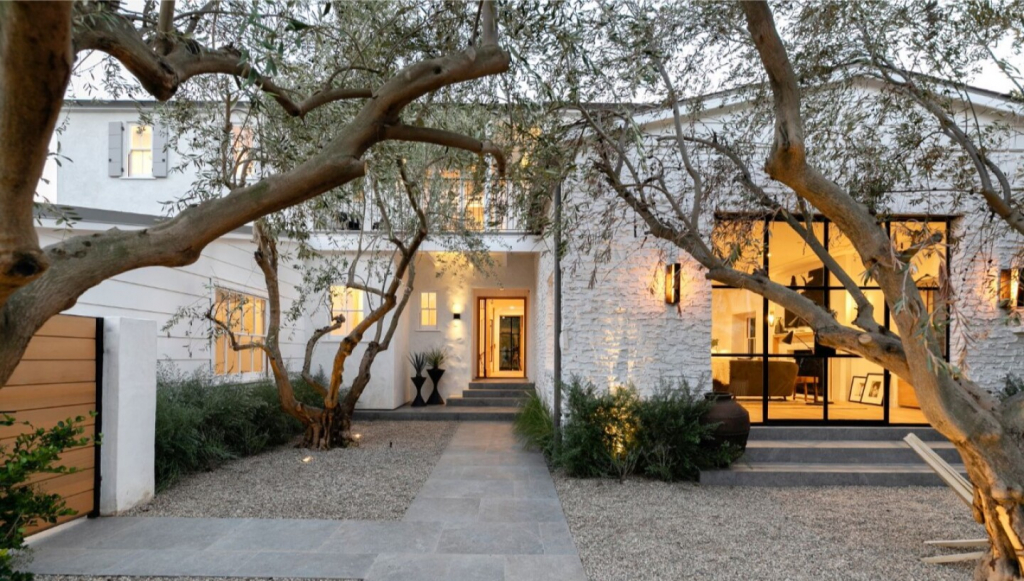 Justin Bieber ended up half-a-million short in Beverly Hills, where he just sold his 1930s Colonial-style home for $7.955 million, The Times has confirmed. The pop star paid $8.5 million for the property just two years ago. The Grammy-winner probably isn’t sweating the loss. Last summer, he shelled out $25.8 million for a much larger estate on 2.5 acres in Beverly Park, The Times previously reported. This place is a bit smaller, centering on a 6,132-square-foot home entered by a courtyard dotted with olive trees. Recently reimagined by Hollywood production designer Charles Infante, the two-story house features a whitewashed weeping brick exterior and formal living spaces marked by white oak accents and steel-framed windows and doors. 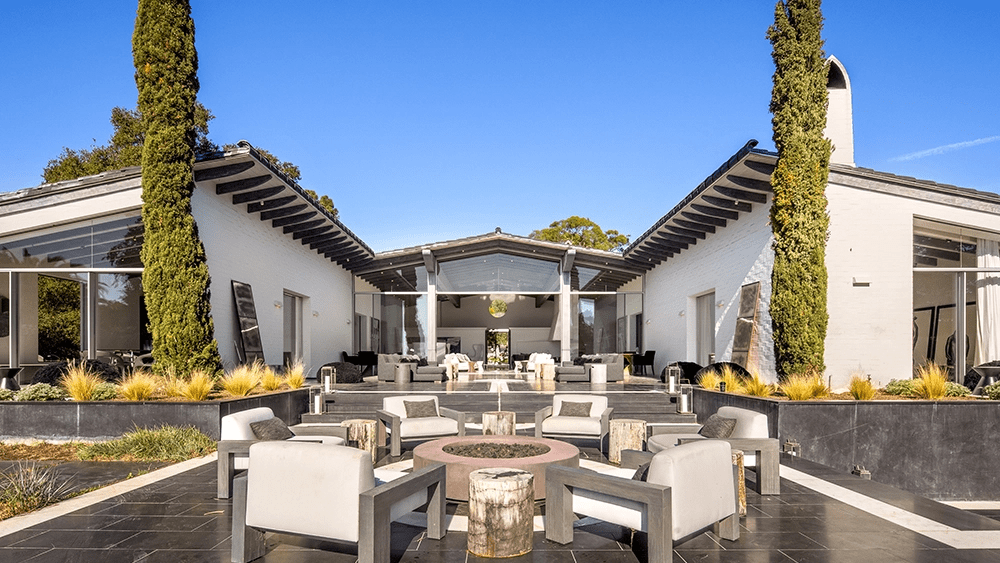 These days, a “for sale” sign on any oceanfront compound overlooking the crashing Pacific in the celeb-rich enclave of Santa Barbara, Calif. will likely have buyers standing in line. But one designed by the legendary architect Wallace Neff, inventor of the so-called “California style,” is only going to have heightened appeal. To add to the attraction, the iconic Straus House, designed in 1970 by Neff as a weekend retreat for Macy’s department store heir Robert K. Straus, is part of the tony Hope Ranch community just north of the city. Which all adds-up to the likelihood of one stratospheric asking price. As to exactly what that is, the owners—believed to be high-profile LA real estate investor A. Stuart Rubin and wife Annette—are, for now, keeping it out of the public domain. It makes sense. Back in 2017, they tested the market for the 1.53-acre property with an ambitious $32.7 million asking. Six months later with no takers, the price came down to $24.9 million. In October 2018, it was re-listed at $21.5 million only to be taken off the market in April 2019. But with the pandemic seeing demand for high-dollar Santa Barbara homes soaring and supply essentially drying up, the owners are trying their luck once again. Listing agents Weston Littlefield and Dalton Gomez of Aaron Kirman Group at Compass say the new price is “available upon request” to qualified buyers. The home itself is a classic Neff hacienda design that makes the most of the jaw-dropping location high on a bluff overlooking the Pacific, with distant, hazy views of the Channel Islands. In 1970 the architect was at the height of his career, having already designed homes for Hollywood A-listers like Charlie Chaplin, Groucho and Harpo Marx, Daryl Zanuck and Louis B. Mayer. He’d also masterminded the high-profile redesign of Pickfair, a vast Tudor-style mansion, for screen stars Mary Pickford and Douglas Fairbanks. 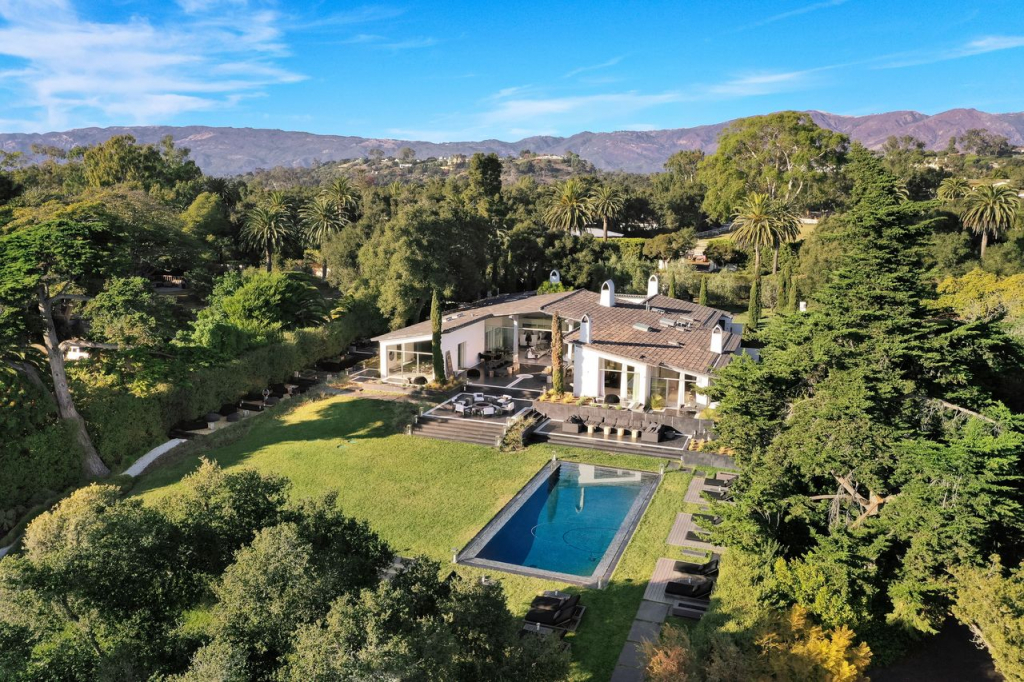 The house, which epitomizes the architect's California Style, was once listed for north of $32 million The owners of a Santa Barbara mansion by Wallace Neff, the architect who perfected the so-called California-style home, are quietly looking for a buyer amid a surge in demand for houses in the affluent coastal area. The sprawling, single-story mansion known as the Straus House, with its white-washed brick facade, clay-tile roof and exposed beams, epitomize the kind of rich Spanish Colonial-inspired homes that made Neff popular among a raft of celebrity clientele during the mid-20th century. The home has undergone a more recent expansion that included carving out amenity-packed basement levels and opening up some of its internal floor plan, according to a website promoting the house. “We’ve noticed that a lot of the big sales in Montecito have sold off market, and this house is just one of those pieces,” said agent Weston Littlefield, who’s working with the sellers alongside Dalton Gomez, both of the Aaron Kirman Group at Compass. “They’re like art pieces.” The 1.53-acre property sits on a bluff overlooking the Pacific Ocean from Hope Ranch, a tiny, affluent suburb north of Santa Barbara. The owners, a local developer and his wife, who once listed the home for north of $32 million in 2017, and their agents are not publicizing the asking price this time around. It was last taken off the market in 2018 with a $21.5 million price tag. At the moment, the only home publicly listed for sale along this stretch of coastline in Hope Ranch is a new build on four acres asking $39 million. Straus House is so named for its original owner, Robert K. Straus, a native New Yorker and an heir to the Macy’s fortune, who served in President Franklin D. Roosevelt’s administration and later moved to Southern California, where he founded a printing company. Straus and his wife were fans of Neff’s designs, having owned one in the Bel Air neighborhood of Los Angeles for many years before commissioning the architect to construct the Hope Ranch estate in 1970, according to a 1971 profile of the property in Architectural Digest. 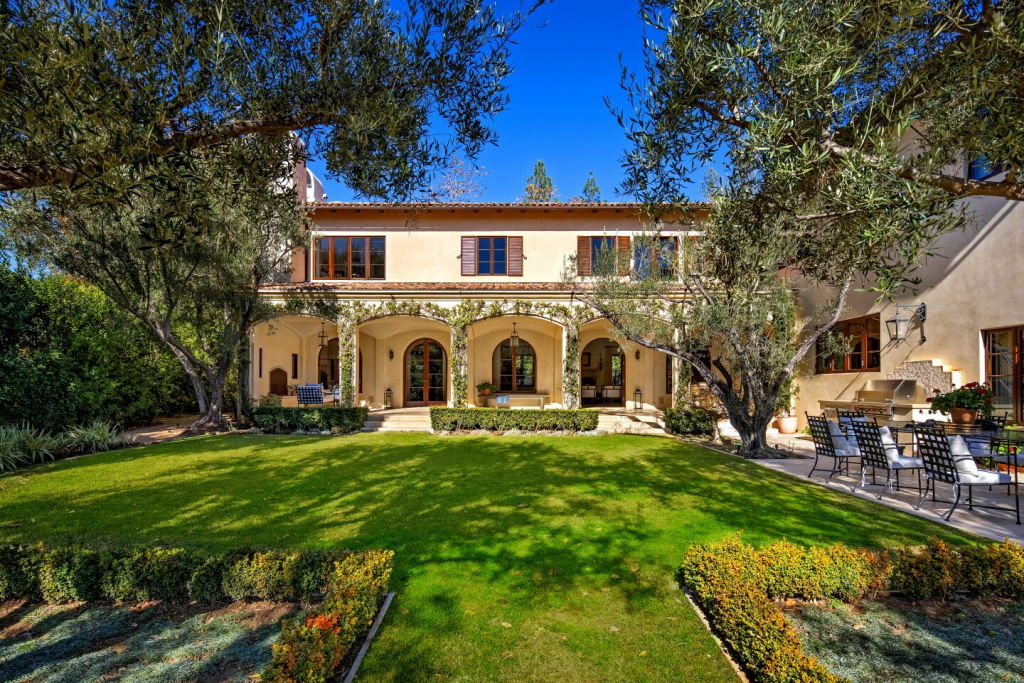 Home of the Week: A Tuscan-inspired retreat in the Palisades

Every space makes a statement in this modern villa — whether it’s the 30-foot foyer, the 3,000-bottle wine cellar or even the hallways lined with stone columns and arched ceilings. Designed by Marc Appleton, the Tuscan-inspired spot sits on half an acre in the Riviera, a country club community with residents including Matt Damon, J.J. Abrams and Adam Levine. Out back, the L-shaped abode frames a leafy backyard with a swimming pool, spa and two fireplaces. Location: 1571 N. San Remo Drive, Pacific Palisades, 90272 Asking price: $12.3 million 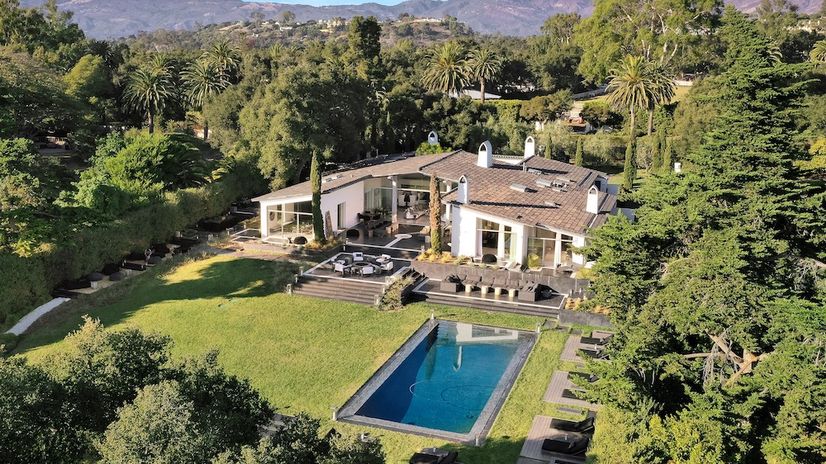 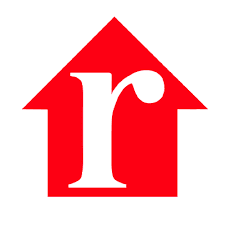 Aspectacular oceanfront home in Santa Barbara, CA is now available—even though buyers won’t find it on realtor.com®. Apparently inspired by recent big-ticket sales along the Central Coast, the owner has chosen to go the off-market route, according to Mansion Global. No price on the place has been made public, but it would be divulged to a qualified buyer. To get a ballpark estimate, the coastal estate was listed in 2017 for $32.75 million, and then relisted in 2018 for $21.5 million. The estate, designed by Wallace Neff and known as the Straus House, had originally been commissioned by Robert K. Straus, heir to the Macy’s fortune, who purchased land in what’s known as the Hope Ranch enclave of Santa Barbara. Straus and his wife lived in a Bel-Air home designed by the Southern California architect, and tapped him to design their coastal retreat. For the interiors, the designer John Hall, who had completed several projects for their Bel-Air residence, was brought in. Neff collaborated with the celebrated landscape architect Thomas Church to design the grounds. Finished in 1970, the coastal abode made a splash when it was first unveiled 50 years ago. Featured in Architectural Digest, the eye-popping estate has since changed hands and undergone a massive renovation. The property is described as “painstakingly restored, expanded, and modernized over a 10-year period,” according to the website promoting the property.